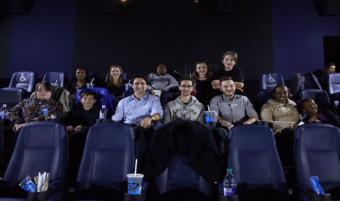 The 20 patients who joined the PM for the screening, which opens to the public Dec. 18, ranged in age from 8 to 17 years old.

Based in Ottawa, Ontario, the Children's Hospital of Eastern Ontario (CHEO) is the main pediatric health and research facility in the region and runs specialized programs for eating disorders, autism, psychiatric mental health, sexual assault, telepsychiatry and early language development.

The Force is strong in Trudeau. A noted science fiction fan, in the past Trudeau and his wife Sophie have dressed as Star Wars characters Han Solo and Princess Leia for Halloween, he's been known to attend Comicon events in Ottawa and Montreal, and on Oct. 21, 2015, also known as Back To The Future Day in honour of the Michael J. Fox time travel movie franchise Back To The Future, he posted a photo of himself and his family in the film's signature DeLorean automobile.

Trudeau tweeted about screening yesterday, saying, "Just saw #TheForceAwakens with friends from the Children's Hospital of Eastern Ontario. Spoiler: It was amazing!"

Just saw #TheForceAwakens with friends from the Children's Hospital of Eastern Ontario. Spoiler: It was amazing! pic.twitter.com/HVvdVDesfA

At CHEO they were excited their patients got to share a special event with the prime minister.

"A big CHEO bear hug to Prime Minister Justin Trudeau who invited a group of CHEO kids to watch a special sneak peak of the new Star Wars movie. We suspect this is a memory they will share with their kids one day!" read a post on the CHEO Facebook page.

Walt Disney, the studio behind the making of Star Wars: The Force Awakens, was well aware of Trudeau's fondness for all things Star Wars. Back in October the company extended an invitation for Trudeau to attend an advance screening of the film after photos circulated of his children playing with toy lightsabers.

"The Force is strong with this one. The 1st invitation to the Cdn premiere of #TheForceAwakens goes to @JustinTrudeau," it said.

The Force is strong with this one. The 1st invitation to the Cdn premiere of #TheForceAwakens goes to @JustinTrudeau https://t.co/DLtrn3yN7T