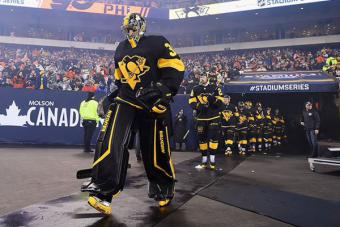 Pittsburgh Penguins goaltender Matt Murray will be auctioning off a historic set of equipment to support area LGBTQ causes.

The National Hockey League player is donating his custom-made set of goaltending equipment including the mask, pads, blocking and catching gloves Murray wore during the special Stadium Series game between the Penguins and Philadelphia Flyers on February 23, 2019. Starting bid on the gear is $5,000 USD ($6,630 CAD) and also includes a meet-and-greet with Murray and four tickets to the Penguins' "Pride Night" game on March 24. The auction closes on Dec. 11 and proceeds will go towards the Delta Foundation of Pittsburgh.

Founded in 1996, the Delta Foundation's mission is to be "a vigilant catalyst for change that produces increased opportunities and a high quality of life for the lesbian, gay, bisexual and transgender community in Western Pennsylvania." The organizations produces and/or supports a number of events like Pittsburgh Pride and Pittsburgh's World AIDS Day activities in addition to cultivating relationships with the likes of Pittsburgh Downtown Partnership, Pittsburgh Cultural Trust, City of Pittsburgh, ACLU, Stonewall Democrats, Equality PA and Pennsylvania Diversity Network.

"I am proud to the Penguins' ambassador once again for 'Hockey is for Everyone,'" Murray said, in a statement. "My hope is that auctioning my Stadium Series gear will bring more attention to our Pride Night, and provide extra assistance to the Delta Foundation of Pittsburgh. I look forward to meeting the winning bidders."

"Hockey is for Everyone" is a campaign the Penguins embarked on for their 2019-20 season to "provide a safe, positive and inclusive environment for players and families regardless of race, color, religion, national origin, gender, disability, sexual orientation and socio-economic status." Some of the team's initiatives this season include a Black Hockey History Day, Hockey Day In Pittsburgh, Her Hockey Day and its Pride Night.

The Stadium Series game between the Penguins and Flyers was a rare NHL contest in an outdoor venue. Taking place at Lincoln Financial Field in Philadelphia, Pennsylvania, the game attendance was 69,620 with the Flyers winning 4-3 in overtime. Murray, the losing goaltender, made 33 saves on 37 shots.