Photographer and Police Officer Team for Portraits For Presents 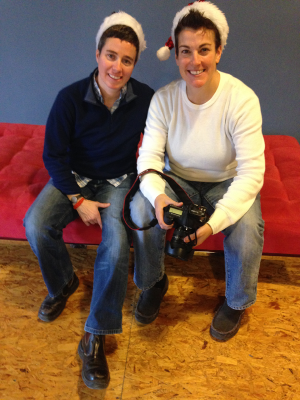 Toronto photographer Heather Pollock and police constable Jennifer “JJ” Nantais know each other from playing hockey together. Who would think that shooting pucks would lead to shooting portraits for presents?

For the second year in a row, Pollock — who has shot such musicians as Blue Rodeo, Finger Eleven, Serena Ryder, Oh Susanna and The Strumbellas — has offered a free mini photo shoot to as many people as she can squeeze into a day — on one condition: they bring an unwrapped toy for a designated child living with their single mom at Humewood House. Nantais runs a program there called Survivor Girl.

Humewood House was founded in 1912, helping "Toronto’s most vulnerable single parents and their children make their way in the world," it says on the website. "In addition to helping young women give birth to healthy babies and transition into motherhood, Humewood House helps them plan and build goals for their future. We offer pre and post-natal residential services, transitional housing, life skills, childcare, a high school program and counselling."

Nantais tells Samaritanmag, “Some were homeless, some were living in shelters, some were living with friends, some were living with other family members and they all feel very lucky to be in this situation [at Humewood House]. They provide them with opportunities to go to school or get jobs. They are allowed to be there for up to 4 years, so it gives them a chance to either get their education or make some money to be able to pay for market value housing.”

Natais works for the Toronto Police Service in the Divisional Policing Support Unit, “community mobilization,” she explains, and first became involved with Humewood House when she was asked to talk with the young women about bullying.  That grew into Survivor Girl, for which she does presentations on domestic violence, personal safety, careers in police services, even cooking.

Pollock — a mother of two — wasn’t aware of Humewood House. She simply wanted to do something charitable, anonymously, for Christmas 2013.  Before it even dawned on her to use the skills she has as a professional photographer, she tells Samaritanmag she had read about “secret Santas” in the U.S. paying off people’s layaway balances and wanted to do the same.

She sent emails and telephoned a number of different big box stores in Canada from Sears to Walmart. “No one would let me. Policy. They just don’t do it here,” Pollock says. She mentioned it casually to Nantais.

“I was like, ‘Just so you know, I have a group of young women with kids that I’ve been working with for the last two years and they need gifts for Christmas,” Nantais says. “And she’s like, ‘Right on.’ So she put the idea together about taking pictures, Portraits For Presents.”

Last year, there were 36 kids in need of gifts; this year 37. Nantais says they belong to 27 young moms and range in age from newborn to 8 years old.

In 2013, Pollock did 15-minute shoots; this time, she upped it to 20 minutes to give people with babies, young kids or dogs time to adjust and relax in front of the camera. “It wasn’t so rushed," she says.

Each person who books a shoot is provided with the name, age and tidbit of information about the child. In the case of this reporter and Portraits For Presents participant and friend Eve Fischer, we were given two 3-year-old boys, Matteo, who “likes Little People play sets” and Liam, who “LOVES animals and farm sets.”

“The social worker she’s really great. Her name is Josie [Dagostino],” says Nantais. “I call her up and say, ‘Give me a list of the kids and something they like.' She knows all the kids very well and she comes up with the list in half a day and emails it to me.”

Pollock didn’t go to the big gift giving X-mas party either year, but Nantais did. “I had another police officer [Vince Langdon] come with me dressed up as Santa Claus, and he was dancing with the kids and we had them all come up to him and sit on his knee and take pictures and each kid got a huge bag of gifts, it was unbelievable.”

Pollock didn’t go the party last year because she was “a little bit nervous to do so,” but received “one of the sweetest letters ever from Officer Santa who talked about what a great time he had," she says. This year, she planned to go and take her camera with her, do some family portraits, but she had another commitment. 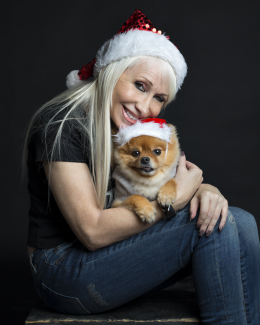 “Here's an example of the irony that rules my life,” she says. “I was totally pumped to go, but was absolutely swamped getting the editing done for people pre-Christmas from the Portraits For Presents shoot that I wasn't able to go. Chained to Photoshop. Seriously. I would have loved to be at the celebration, but of course my commitment was to the folks that I promised portraits to, and so very many of them were Christmas-related — and therefore holiday-time sensitive.”

Officer Vince — who played the role of Santa last year — picked up the remainder of the presents from her house to take to the party just before going on vacation with his kids. People had also dropped off additional toys, clothing, and diapers.

“You asked me why I wanted to do this to begin with. I became a mom a few years ago," Pollock says. "I had been reminded of the magic of Christmas; of the joy and the hope that exists for my kids, as it existed for me in my youth. I guess I just wanted to do my best to ensure that the hope of the holiday season is available to as many kids as possible, and that the stresses of the season that can be placed on parents in tougher situations is lessened a bit. I feel so very fortunate in my life, and it just feels right to pass some of that along to others.

“Had I been able to attend, there's no way I would have wanted anyone to know I was involved. I can tell you in complete honesty that I fell asleep that night with a big grin and warm heart. Doing nice things for people is its own reward. I challenge anyone to make a small act of kindness — something as simple as buying a coffee for the person in line behind you at Tim Hortons. You will glow. They will glow. And the ripples with go on and on and on and on...

“I kid you not, when I got home from shooting the Portraits for Presents marathon photography day, on my porch there was a bottle of wine and some Christmas cookies from neighbours. Very random, and yet so very appropriate. There is a giant circle of kindness. Reach out. You'll feel it.”