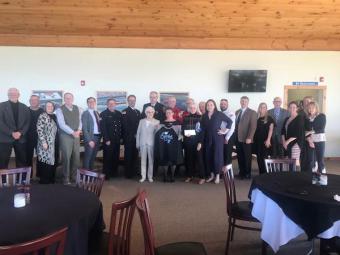 Curveball was a three-day festival Phish were set to host in August 2018 at Watkins Glen International Raceway in New York State. It was cancelled over health concerns due to flash-flooding in the area. Finger Lakes was hit by a 14-county state of emergency and a mandatory boil water order for the village of Watkins Glen. Of particular concern for the festival was the fact that the flooding made it impossible to provide potable water to the event.

Phish have tapped the Community Foundation of Elmira-Corning and the Finger Lakes to distribute the funds. The seven non-profits in Schuyler County that will each receive $14,875.06 USD ($19,857 CDN) are the Arbor Housing and Development Foundation, American Red Cross of the Finger Lakes, Dundee Fire & Rescue Team, Hector Food Pantry, Humane Society of Schuyler County, Watkins Glen Fire Department and Valois, Logan and Hector Fire Department.

The Red Cross operated emergency shelters for families of Finger Lakes displaced from their damaged or destroyed homes by the severe flooding, while the Dundee Fire & Rescue team, the Watkins Glen Fire Department and the Valois, Logan and Hector Fire Departments helped steer evacuation efforts.

Alongside state and federal agencies, the non-profits filled in emergency service gaps, including shelter and medical needs, food and clean water supply, animal care and safety, and fire and rescue.

That included the Dundee firefighting team removing cats from Humane Society of Schuyler County's "kitty kaboose" building at its the animal shelter and the Watkins Glen fire brigade operating a water rescue team for local residents.

The Arbor Housing and Development Foundation is involved with residential and retail revitalization projects. The Hector Food Pantry, a local food bank, operates out of the Hector Presbyterian Church in Hector, New York.

The grant funding originated from the band Phish and their non-profit The WaterWheel Foundation.

"We were all so disappointed by the cancellation of Curveball last summer and recognize, in particular, that Watkins Glen and the surrounding communities suffered terrible consequences from the flooding. Being able to make this donation reaffirms all of our goals as a charitable foundation, harnessing the collective philanthropic efforts of Phish and their fans to be able to give meaningful donations to the communities that we visit on tour," Beth Montuori Rowles, executive director of The WaterWheel Foundation said in a statement.

Michael Printup, president of Watkins Glen International Raceway, where the grant ceremony took place praised Phish and The WaterWheel Foundation for their gesture.

"These tremendous organizations were instrumental in helping Schuyler County residents through last August’s flooding event, and we are proud to host the ceremony at which they will be rightfully honored," he said.

"It isn’t every day that you get a call from a nationally known band such as Phish. We are extremely honored to have been asked to partner with The WaterWheel Foundation, the band’s philanthropic arm, to direct these funds to the right organizations," Randi Hewit, President of the Community Foundation of Elmira-Corning and the Finger Lakes, said.

The Community Foundation of Elmira-Corning and the Finger Lakes offers grants and scholarships to support people living in the Chemung, Schuyler, Steuben and Yates counties in the Southern Tier of New York State.