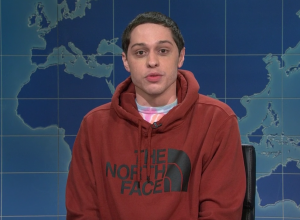 Saturday Night Live’s Pete Davidson has the lead role as George Bailey in a virtual table read of the 1946 classic film It’s a Wonderful Life, which will stream Dec.13 on Zoom at 8 p.m. ET with proceeds from tickets going to the Ed Asner Family Center, “a one-stop shop” for people with special needs and their families started by the legendary actor beloved for his role as Lou Grant.

On last week’s SNL Weekend Update, Davidson plugged the charity event he’s doing “with a bunch of other actors I love too” — including Asner, Vanessa Williams, Maude Apatow, Mia Farrow, Ed Begley Jr., Michael Shannon, Ellie Kemper, B.D. Wong, Richard Kind, Diedrich Bader, Carol Kane, Bill Pullman, and hosted by Tom Bergeron — but the joke was “the thousands of people on Twitter who were extremely angry about it.

“Why are they so mad that I'm doing a little online table read of It's A Wonderful Life? It's an old time-y film about a guy who’s suicidal. I'm famously depressed and have the complexion of someone in a black and white movie,” he quipped. “Like I get it. If it was an actual movie remake of It's A Wonderful Life, yeah, I'd be an odd casting choice. It would be like rebooting The Godfather with Post Malone ‘He’ll make you an offer you can't understand.’”

Tickets are $50 (USD) and are also packaged with such items as an The Greatest Gift, the 1943 book that inspired the filmaut, autographed by Asner; an “I Hate Spunk!” t-shirt (Asner’s famous line from The Mary Tyler Moore Show), and an It’s A Wonderful Life scented candle for $250.

The Ed Asner Family Center, based in Los Angeles, offers a range of arts and career advancement programs after school and on the weekends, as well as counseling and mindfulness classes. In addition to individual and group therapy, examples include cooking, painting, music therapy, theatre and dance classes.