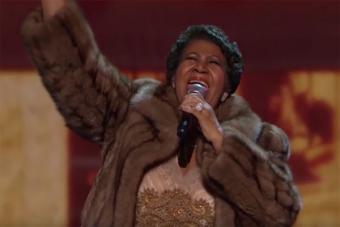 Aretha Franklin was known for wearing elegant fur coats on stage and then dropping said coats off her shoulders and to the ground during particularly dramatic moments of the songs she was singing.

Now the People For Ethical Treatment Of Animals (PETA) are hoping those responsible for Franklin's estate will shrug off the singer's collection of fur coats as part of their "Donate Your Fur To PETA" campaign.

PETA repurposes the furs they receive in a number of ways, including using them at wildlife rehabilitation centres as bedding for orphaned animals, as well as giving them to homeless people and to refugees in Afghanistan and Iraq. Donating furs to PETA is tax-deductible.

The animal rights organization recently sent an open letter to Franklin's niece Sabrina Garrett Owens asking her to consider giving her aunt's furs to PETA. Franklin died on August 16 at age 76 due to pancreatic cancer.

"We’re so sorry for the loss of your aunt," starts the letter from PETA executive vice-president Tracy Reiman. "The world has lost an amazing talent, and we’re grateful that her music will live on.

"Aretha will always be remembered for all that she did to help empower African-American people, especially women, in her lifetime. Might we now call on her estate to help end the cruel era of wearing animal fur by donating her fur coats to PETA, where they’ll go on to offer warmth and comfort to those who need it the most? In the past, we’ve given donated fur coats—some coming from other wonderful women including Anjelica Huston, Mariah Carey, and Mary Tyler Moore—to homeless shelters in the U.S. (including in Detroit) and to displaced refugees in Afghanistan, Mongolia, and Syria.

"Designers, brands, and stores are dropping fur as quickly as consumers are ditching it. As faux fur and other cruelty-free, vegan materials take over, real animal fur can be put to good use, and this generous donation would secure Aretha forever as an 'Angel' for animals."

According to PETA, the likes of Anjelica Huston, Mariah Carey, Kim Cattrall, Mary Tyler Moore and Sharon Osbourne have all donated their unwanted fur clothing to their program in the past.