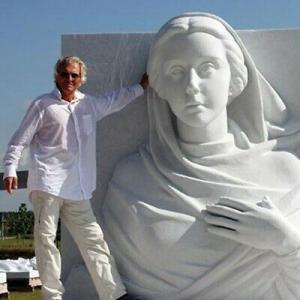 An online auction for well-heeled philanthropists is taking bids for a one-of-a-kind Carrara marble sculpture by renowed Hungarian artist Márton Váró as means to raise funds for the Visual Snow Initiative (VSI),  a neurological condition that affects the eyesight, hearing and quality of life of thousands of people worldwide.

Those afflicted with Visual Snow Syndrome see the world through an overlay of tiny dots that move across their field of vision like a static television, along with other images. They usually suffer other symptoms as well, such as tinnitus, impaired night vision and headaches. It often strikes people during the prime of their life.

Bidding is open until Jan. 11 for the opportunity to commission a life-size sculpture of anyone the winner chooses, and much more. The full package includes: first-class air and ground transportation for two people to and from the Tuscan Riviera in Italy; a four-night stay at Principe Forte dei Marmi and a treatment for two at its spa; a day excursion to the quarry where the winner and Váró will select the stone that he’ll sculpt; a wine-paired dinner for two with Váró at Ristorante Ciccio Marina; and a video documentary capturing the eight-month creation of the sculpture at every stage (travel for the winner is optional due to the pandemic).

The 77-year-old Váró, who lives in California, spends his summers in Carrara to work.

The successful bidder will have one year to fulfill the experience. The price for the prize package was $300,000 (USD) as of Dec. 17.

All of the proceeds will go to VSI, which is dedicated to education, research and finding a cure for Visual Snow Syndrome.

Sierra Domb founded VSI in January 2018 to increase awareness of Visual Snow Syndrome, build a community for those who suffer from it, and generate research capital needed to find a cure. Domb was a University of Miami student when she was first stricken by the condition in the fall of 2015.

“Unfortunately, there is no known cause, treatment, or cure for Visual Snow Syndrome, and few health care providers have heard of it,” said Domb in a media release. “So, most people suffering from it are misdiagnosed or marginalized by well-intentioned but uninformed physicians. We need to change this.”

Since its inception, VSI has funded hundreds of thousands of dollars to a global team of researchers, physicians and neuroscientists who are collaborating to try and find a cure for Visual Snow Syndrome.