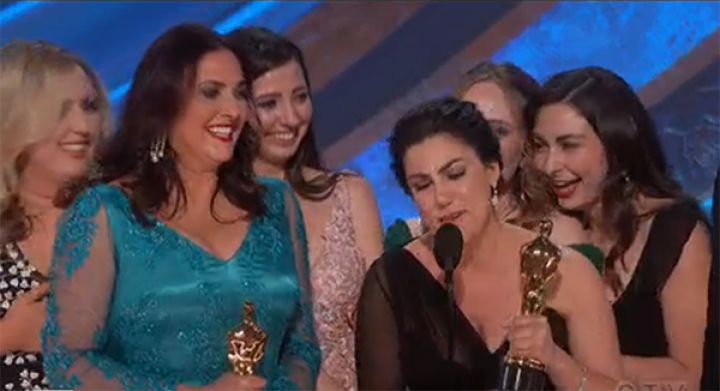 ​When girls in the developed world experience menstruation, it's common for them to miss school or even drop out — from shame, from pain, from the taboo.

When 12 high school students at the Oakwood School in North Hollywood, California learned that girls in a village near Hapur, Uttar Pradesh in India risked losing their right to an education when they got their periods, they set about raising funds to offer low cost sanitary napkins at the rural school.

The experience of girls and women in Hapur seeing menstrual pad machines installed in their village, and their lives transformed as a result, was turned into a 26-minute documentary, Period. End of Sentence, which won an Oscar (Feb. 24) for best short subject documentary on Sunday (Feb. 24) for director Rayka Zehtabchi.

Oakwood School teacher Melissa Berton, accepting the trophy along with Zehtabchi on behalf of her students at the Academy Awards, gave an emotional shout out to their local Indian partner, Action India, for helping to offer low-cost sanitary napkins to Indian school girls with their period so they could attend class and, crucially, complete their education.

"This film began because high school students here, and our brave partners at Action India, wanted to make a difference, a human rights difference," Berton said in her speech. "I share this with teachers and with students around the world. A period should end a sentence, not a girl's education."

According to its web site, Action India works towards enhancing the participation of women as citizens to claim their rights and entitlements, to public health and civic services to better the environment and quality of life of the urban poor.

Well before their Oscar glory, Berton and her students launched The Pad Project non-profit to install the menstrual pad machine in Hapur with help from Action India. That was no easy task as they had to battle a traditional taboo in rural India against menstruation by breaking down silence around the issue. 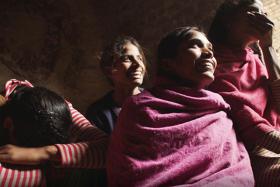 As the short doc's official trailer underlines, so great is the stigma around having a period for young girls in rural India, many don't even know what a sanitary napkin is, or how to use one, should they even have access to them.

The impact of their menstrual pad machine, created by a local Indian inventor Arunachalam Muruganantham, goes far beyond helping young girls stay in school. For example, older women in their village earn a living wage by operating the micro economy pad making machine.

Period. End of Sentence has always been about awareness, according to its creators.

Berton's own social advocacy and that of her students began with a 2013 Girls Learn International trip they took to the United Nations.

Girls Learn International, a part of the Feminist Majority Foundation, aims to give young women around the world equal access to education. Berton's students at Oakwood were part of a local GLI chapter, as were the young India girls at the village school in Hapur who were eventually aided by The Pad Project initiative.

The goal of The Pad Project initially was to get a biodegradable pad making machine to be installed in Hapur by Action India at a cost of around $10,000. For young girls in rural India, not having access to hygienic pads means they sometimes have to use unsanitary cloth or rags, which risks infections and disease.

"A period should end a sentence, not a girl's education. But, unfortunately, that's exactly what's happening all over the world," reads The Pad Project website.

One other benefit of The Pad Project was that it offered menstrual pads at an affordable price.

"The machine is made in Muruganantham’s factory, and then installed and operated by locals to produce a highly effective and hygienic napkin that costs about three rupees each, far less than commercially produced pads," the Oakwood School explains on its website.

While working on this project American students also learned the true extent of the taboo around having a period in rural India.

"We thought that the major issue was that girls were not going to school because of their periods,” Ruby Schiff, a 2017 Oakwood graduate says on the school's website.

"In reality, the major issue is a lack of education and the stigma around menstruation. I remember on one of our (Skype) calls I was showing them what a tampon looks like. I put it in a cup of water and showed them how it expanded. They were all freaking out," Schiff added.

The students also decided to raise another $39,000 for a short film to market The Pad Project.

Berton and her students turned to Kickstarter to help finance their film. Zehtabchi, an award-winning Iranian-American director, agreed to helm the project along with her editor Sam Davis and Guneet Monga, the veteran Bollywood producer of The Lunchbox.

As the cameras rolled, Zehtabchi captured the reaction of young students to gaining access to sanitary napkins as older women in the village unpacked the pad machine and got a business off the ground. That was important to the American students, who never wanted to be seen as "white saviors," according to their school's website, but as the vehicle to generate new economic opportunity and advancement in a rural village.

"They wanted to remain in the background, providing the means and the inspiration for change, and letting the women be their own agents of progress, discovering how best to incorporate the machine, and its benefits and challenges in their society," the school website explains.

When Netflix saw Period. End of Sentence the company agreed to license the film as well as enlisting celebrity support to spread awareness, including Bollywood star Priyanka Chopra who appeared in a promotional video to support the project.

Momentum for The Pad Project has been growing.

Credit Suisse agreed to donate $150,000 to Action India to help get the pad machine into Hapur and others elsewhere, according to the Oakwood School website.

The Pad Project also partnered with This Is L, an all-natural tampon and pad maker that has funded more pad machines for India, but needs help from Action India installing them in more local villages.

And as much Berton and Zehtabchi, in their Oscar acceptance speech, expressed shock over a film about menstruation having made it onto an Academy Awards stage, the Oakwood students have with their advocacy helped launch a global conversation where once there was virtual silence.

"When I was a senior in high school and I spoke at a town meeting,” Helen Yenser, a 2013 Oakwood graduate, recalled on her high school's website.

"The audience’s shocked reaction made me feel like I was the first person to ever talk about menstruation in a public gathering. Now it’s a much less taboo subject in our society. At the time, there was no information about it, but now there are numerous organizations raising money for similar projects."