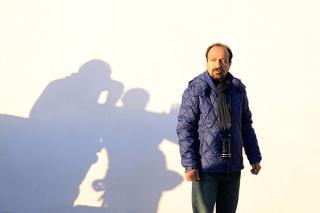 Asghar Farhadi, the Iranian director who boycotted the Academy Awards last night at the Dolby Theatre in Hollywood because of President Trump’s Muslim ban, ended up winning the Oscar for best foreign film for The Salesman and sent a statement to be read from the stage. The same day, thousands of people gathered in London's Trafalgar Square for a solidarity screening of the film held outside for free, as part of the city's #LondonIsOpen campaign.

Former NASA scientist Firouz Naderi, and engineer and one-time astronaut Anousheh Ansari, both Iranian-Americans, accepted the Oscar on Farhadi's behalf. Ansari read his acceptance speech, which began with thank yous — to members of the Academy, his crew in Iran,  his producer Alexandre Mallet-Guy, Cohen Media, Amazon and his fellow nominees in the foreign film category — before getting to the heart and soul of his message.

“My absence is out of respect for the people of my country and those of other six nations [Syria, Libya, Sudan, Somalia, Yemen, Iraq] whom have been disrespected by the inhumane law that bans entry of immigrants to the U.S.,” she relayed, which was met with applause.

“Dividing the world into the us and our enemies categories creates fear, a deceitful justification for aggression and war,” she continued. “These wars prevent democracy and human rights in countries which have themselves been victims of aggression. Filmmakers can turn their cameras to capture shared human qualities and break stereotypes of various nationalities and religions. They create empathy between us and others, an empathy which we need today more than ever.”

In London, thousands came out to see The Salesman for free in Trafalgar Square, as part of the #LondonIsOpen campaign, which was launched in October, 2016 by Mayor Sadiq Khan. The city’s first Muslim mayor was born in Britain to Pakistani immigrants.  The film screening and musical performances were intended to send a message “loud and clear that London is open to all people and all communities.”

Farhadi, sent a video message of thanks to London (see below).

A petition on the U.K. government's web site to deny Trump an official state visit has climbed beyond 1.8 million signatures.

The Tehran-based director — who won an Academy Award in 2012 in the same category for A Separation— released a statement shortly after the executive ban was signed by Trump, putting a three-month constraint on individuals from seven countries from entering the United States. When it was suggested he might be granted an exception in order to attend the awards, Farhadi declined.

“I …hope that the current situation will not give rise to further divide between nations,” he said.

“Hard-liners, despite their nationalities, political arguments and wars, regard and understand the world in very much the same way. In order to understand the world, they have no choice but to regard it via an ‘us and them’ mentality, which they use to create a fearful image of ‘them’ and inflict fear in the people of their own countries.

“This is not just limited to the United States; in my country hardliners are the same. For years on both sides of the ocean, groups of hardliners have tried to present to their people unrealistic and fearful images of various nations and cultures in order to turn their differences into disagreements, their disagreements into enmities and their enmities into fears. Instilling fear in the people is an important tool used to justify extremist and fanatic behavior by narrow-minded individuals.

“However, I believe that the similarities among the human beings on this earth and its various lands, and among its cultures and its faiths, far outweigh their differences."