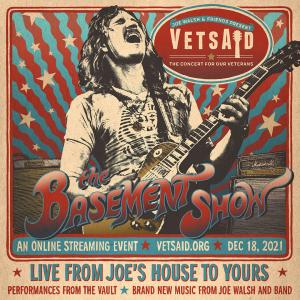 Singer, songwriter, musician and producer Joe Walsh is inviting people to his basement Dec. 18 for a virtual fundraising concert, with lots of extras, to support his VetsAid non-profit organization.

Walsh — a Rock and Roll Hall of Fame inductee and Grammy Award winner who’s had a solo music career as well as being a member of James Gang, The Eagles and Ringo Starr & His All-Starr Band — will also answer fan-submitted questions and give a virtual tour of his basement studio and guitar collection.

Donations of $15, $25 and $50 (all U.S. dollar figures) will provide access to the live stream. Those who donate $75 will also receive a VetsAid 2021: The Basement Show poster. A $100 donation will get you those plus a T-shirt. A baseball cap is added to the prize pack for a $250 donation. Donors who contribute $500 will get all of the above plus a camouflage hoodie.

VetsAid 2021: The Basement Show will be available online to watch at 5 p.m. PT on Dec. 18 and can be rewatched until the end of Christmas Day. Donations to view the shows can be made here.

All net proceeds from the streams will go directly to veterans’ services charities selected through a vetting process coordinated in tandem with Combined Arms, an organization formed to help veterans accelerate the transition from military to civilian life.

This year’s funding will focus exclusively on homeless veterans and the resettlement efforts of Afghan allies who’ve fled their homeland after it was taken over by the Taliban earlier this year.

“War is hell for everyone involved,” Walsh said on the VetsAid website. “I lost my father when I was a baby, before I could even make a memory of him.

“I stopped counting the number of friends I lost in the Vietnam War or that came home forever scarred mentally or physically or both. We’ve only just begun to appreciate the long-term impacts on our troops home from Iraq and Afghanistan.

"I had to do something and seeing as though rock-and-roll seems to be what I do best, it’s also the least I could do for those who have served and continue to serve our country.

“We’re all in this together as Americans and seems to me lately that people are forgetting that. So I decided to put on a show, raise some money, bring people back together and celebrate our vets… and let’s do it every year!”

Walsh launched VetsAid on Sept. 20, 2017 with a concert at the EagleBank Arena in Fairfax, Va. The second festival was in Tacoma, Wash. and the third was in Houston, Texas. VetsAid 2020 was moved online due to the pandemic.

VetsAid has disbursed nearly $1.8 million to organizations across the United States that support veterans and their families. Non-live stream-related donations to VetsAid can be made here.