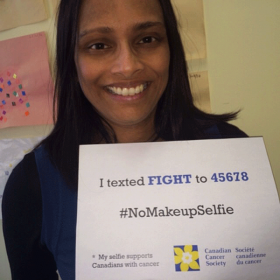 Thousands of women have been taking off their makeup and posting shots of their bare faces on social media, adding the hashtag #nomakeupselfie and nominating their friends to do the same.

Some think it’s just another silly online tagging game; others heard it has something to do with showing solidarity for cancer research and awareness, but don’t understand why. And then there are others that have the whole story — the photo is supposed to accompany the line: Text FIGHT to 45678 to donate $5. That’s the Canadian Cancer Society info; the campaign actually originated in the UK, which has, to date, raised £8 million ($14.72 million CAD) for Cancer Research UK. But in Canada, it’s not faring anywhere near as well.

The first four days more than 900 Canadians raised over $4500, according to Rowena Pinto, vice -president, public affairs and strategic initiatives at Canadian Cancer Society, Ontario Division. By March 30, the tally was only at $10,000. The campaign kicked off the afternoon of March 21 after Samaritanmag first contacted them to see if they had plans to do the same.

“We haven’t seen any similar Canadian campaigns, but we are following the UK story closely. I will absolutely let you know if we notice anything similar here,” said Sasha Anopina, bilingual communications specialist Canadian Cancer Society, on Friday March 21.

“It was literally Friday afternoon that we decided to move forward on it,” Pinto told Samaritanmag. “Initially, we had just started to notice. It hadn’t really picked up in Canada too much at that point so we were monitoring it, and then [we got] the first phone call. After a handful of phone calls that this is something that people wanted, and it was absolutely coming to Canada, we wanted to give people the opportunity to also donate.

“I can’t speak to how exactly this took off,” she says. “I think that’s the beauty of social media. Somebody somewhere decided that not only were they going to make a statement around being able to post a photo of themselves without wearing makeup, but also started to talk about it around cancer awareness . If people were going to be brave and post themselves without makeup, think about the bravery that cancer patients and their families face every single day.”

Stemming from a photo that American crime novelist Laura Lippman posted of herself on Facebook and Twitter in response to negative feedback 81-year-old actress Kim Novak received about her appearance at the Academy Awards March 2, the #nomakeupselfie took on a life of its own, snowballing to trending status in mid-March. Some 1500 photos followed in 48 hours, Lippman wrote on her blog. But at the time, there was no charity attached to the gesture.

According to Metro (UK), that was the brainchild of 18-year-old Fiona Cunningham, who, like Lippman was inspired by Novak but started the No Make Up Selfie For Cancer Awareness Facebook page on March 18, asking men and women to post #nomakeupselfie shots of themselves and donate £3 to the charity (the page now over 230,000 likes).

By March 21, Cancer Research UK had received over £1million in donations as a result of the movement. The charity went public, reminding people to text the word “BEAT” TO 70099 (some money was misdirected to UNICEF as the UK charities share the same text number but have different SMS keywords — UNICEF uses DONATE; the money is being transferred to Cancer Research UK).

A photo of the charity’s chief executive Dr.Harpal Kumar holding a sign on Cancer Research UK’s web site reads: “£8 million!!! Thank you!!! We can now fund 10 clinical trials!!!”  The sum was raised in just six days. 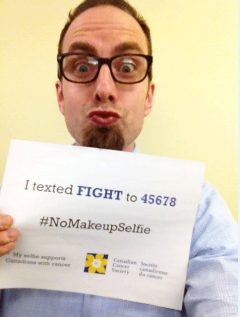 Although touted by some as an opportunity for vanity that simply reflects the everyday narcissism apparent on social media, it is hard to argue that the trend isn’t having an impact, both across the pond and closer to home. The campaign has gained a lot of traction with youth and young adults — groups not typically involved in more traditional fundraising.

“People are generous, and people do want to make a difference,” says the Canadian Cancer Society’s Pinto. “Sometimes they just need to be shown how and why and given an easy way to donate. We were very happy that we were able to give Canadians an easy text number that they could text from anywhere in Canada and actually donate $5, which most people can afford and contribute to the fight against cancer.”

The Canadian Cancer Society is a national, community-based organization, whose mission “is the eradication of cancer and the enhancement of the quality of life of people living with cancer,” it says on its site.

“We work on a number of different fronts so this money will be going towards information services, programs that we have to support people living with cancer, such as our Wheels of Hope program here in Ontario where we drive people back and forth to their cancer appointments who can’t normally make it there themselves,” Pinto explains.

“We are the largest charitable giver to cancer research [in Canada], so that’s an area that we never have enough money for. And we also have a very strong advocacy program as well. We just were successful in passing the Skin Cancer Prevention Act [Tanning Beds, in Ontario], but we are still advocating for a number of things to support caregivers, for example, as well as more tobacco control legislation. So we have a number of different areas [and] every dollar helps us to do that.”