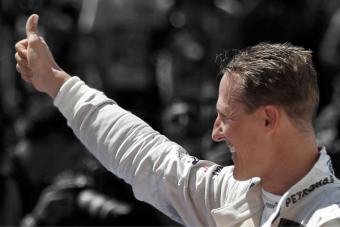 The Keep Fighting Initiative's goal is to "channel the positive energy received by Michael Schumacher and the Schumacher family as a force for good in the world."

Schumacher suffered a traumatic brain injury during a skiing accident in the French Alps on Dec. 29, 2013. Though the family remain intensely private about his health status, he was released from hospital in September 2014 and has has been treated at his home in Switzerland ever since.

"We would like to encourage others to never give up," said Corinna Schumacher, Michael's wife, in a statement about Keep Fighting's launch. "Keep fighting" and "never give up" are the key messages behind the new initiative.

Keep Fighting plans to create a number of projects inspired by the racer.

According to its website, Keep Fighting "will develop projects which unite its community and are able to be undertaken and completed through that support." It lists the Michael Schumacher exhibition in Marburg, Germany, the Champions For Charity football match and the upcoming Michael Schumacher Private Collection exhibition at Motorworld Cologne as events where the organization will spread its keep fighting message.

The Keep Fighting website currently features a mosaic of iconic photos of Schumacher in action throughout his career as well as a wall of well-wishing #TeamMichael messages from people who are inspired by the career and character of the seven times Formula One world champion.

"This is a first step of a movement which we hope can do good in the future," said Sabine Kehm, Schumacher's manager. "The intention of the Keep Fighting Initiative is to spread the belief that giving up is not an option, a message that is valid not only in motor racing. In this way we hope to turn a terrible event, which affects the whole Schumacher family, into something positive."