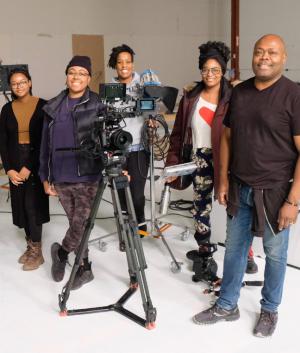 More than 20 Canadian media organizations are working with BIPOC TV & Film to try and eradicate systemic racism in the media and entertainment industries with HireBIPOC, a push to encourage the industry to hire more Black, Indigenous and people of colour (BIPOC). The new online registry features writers, directors, producers, actors, editors, crew members and executives.

The bilingual website provides a database of self-identified BIPOC working in all areas of the screen-based industry and across all education and experience levels. More than 500 people have registered so far, and those looking to be included can create a profile on the site.

Bell Media, CBC/Radio-Canada, Corus Entertainment and Rogers Sports & Media are foundational partners in the initiative. They’ve committed to making the use of HireBIPOC a specific condition of green-lighting original productions.

“If 2020 has taught us anything, it’s that now is the time for brave steps towards radical change,’ said BIPOC TV & Film founder Nathalie Younglai in a media statement. “HireBIPOC is one step amongst many, in order to transform the face of our industry.”

BIPOC TV & Film is a volunteer-run grassroots organization and collective of Black, Indigenous and people of colour in Canada's TV and film industry. It was founded in 2012 to increase the representation of BIPOC both in front and behind the camera.

BIPOC TV & Film offers practical training and educational work. It hosts a series of panels, workshops and networking events aimed at providing opportunities to secure employment in the TV and film industry for BIPOC. The organization also holds events that are open to allies, as it believes their support is integral to creating a welcoming industry for BIPOC.

HireBIPOC was created by BIPOC TV & Film and Bell Media in consultation with BIPOC members and with the support of community groups.

HireBIPOC is supported by a growing list of industry and community partners that includes: