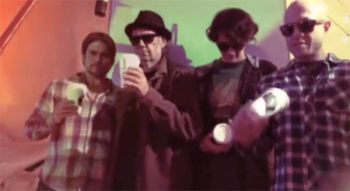 Neil Young is lashing out at Starbucks, Monsanto and the Grocery Manufacturers Association over genetically modified food in his newly released song and video "A Rock Star Bucks A Coffee Shop."

Starbucks issued a statement back in November denying any alignment with Monsanto.  Snopes also investigates.

A video clip of the song, which is from Young's forthcoming album, The Monsanto Years, premiered on Democracy Now's website on May 22 with the full video getting released on YouTube on May 26.

"A Rock Star Bucks A Coffee Shop” starts out with a quick guitar nod to The Clash's "Should I Stay Or Should I Go" before a whistling breakdown from Young and his backing band, Promise Of The Real, leads in to the song's particularly blunt narrative.

Young's first challenge is for people to get their coffee somewhere other than Starbucks because going there would be "helping Monsanto."

"If you don’t like to rock Starbucks, a coffee shop  / Well, you better change your station 'cause that ain't all that we got ,” he sings. “Yeah, I want a cup of coffee, but I don’t want a GMO /  I like to start my day off without helping Monsanto."

Next he cites the legal fight between the state of Vermont vs. the Grocery Manufacturers Association over the association's reluctance to label genetically modified foods.

"When the people of Vermont voted to label food with GMOs / So that they could find out what was in what the farmers grow / Monsanto and Starbucks through the Grocery Manufacturers Alliance sued the state of Vermont to overturn the people's will."

Young then throws down with the particularly inflammatory line, "Mothers want to know what they feed their children."

Starbucks stated in November 2014 they're "not aligned with Monsanto to stop food labeling or block Vermont State law" or "a part of any lawsuit pertaining to GMO labeling," saying they have "not taken a position on the issue of GMO labeling. As a company with stores and a product presence in every state, we prefer a national solution." That said, as recently as last year Starbucks and Monsanto were both publicly listed amongst the more than 300 members of the Grocery Manufacturers Association.

Young, for one, isn't buying it.

"Still no latte's for me folks," he wrote on his official website recently. "I am not going to support a company that actively tries to defeat the will of the people by fighting their right to know what is in the food they eat.

"Contrary to the misleading information coming from Starbucks, the coffee company is in alliance with other Food Giants, including Monsanto, in suing the state of Vermont to overturn the GMO labeling laws voted for by the people."

The singer also doubled down on his anti-Monsanto stance on May 24 when he and girlfriend Darryl Hannah participated in the "Outgrow Monstanto" community planting event in Maui, Hawaii, where they joined more than 200 people planting coconut trees, taro, sweet potato and yams. He also performed the song "The Monsanto Years" while under a simple garden tent at the event.

Monsanto, Starbucks and genetically modified foods aren't the only things Young's been battling against lately. The classic rocker will perform a number of "Honour The Treaties" benefit shows this summer to support the Athabasca Chipewyan First Nation Legal Defense Fund in their fight against oil company interests. He also came out strongly against the oil extraction process known as fracking in the 2014 song “Who's Gonna Stand Up? (And Save The Earth).”

The Monsanto Years is due for release June 29 and was recorded with Promise Of The Real as Young's backing band. The band features Willie Nelson's sons Lukas Nelson (vocals/guitar) and Micah Nelson (guitar, vocals) as members.