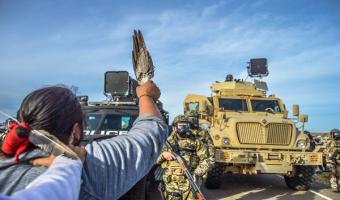 "We are calling upon you, President Barack Obama, to step in and end the violence against the peaceful water protectors at Standing Rock immediately," wrote Young in a lengthy letter posted to his official Facebook page yesterday (Nov. 28).

The 71 year-old rocker behind protest anthems like "Ohio" and "Southern Man" touched on a number of related topics in his missive about Standing Rock. Young started off by calling U.S. Thanksgiving "a fictional history" that was "invented to whitewash the vicious genocide wrought upon the native inhabitants of this magnificent continent," and acknowledged Standing Rock protest featured the "unprecedented historical gathering of over five hundred tribes and thousands of others standing on the front lines to protect water," before adding, "This growing movement stems from love, it is the most human instinct to protect that which we love."

Since April 2016 the Standing Rock protestors have been at odds with the Energy Transfer Partners oil company because of its decision to route the Dakota Access Pipeline through disputed lands near the Standing Rock Indian Reservation. Anti-pipeline protestors, known as water protectors, have argued that the pipeline's placement unduly risks contaminating the Missouri River and the drinking water for nearby residents. Additionally, water protectors have accused pipeline workers of desecrating sacred burial sites. In response, privately hired paramilitary have used attack dogs to assault protestors and police have used water cannons and rubber bullets on protestors during extremely cold weather days.

Young, who visited Standing Rock on his birthday Nov. 12, then lashed out at U.S. President-elect Donald Trump for his woeful environmental record.

"Two hundred of the worlds nations believe in science, above the profits of the oil, gas and coal industries, and are committed to working together to protect the future from an unchecked climate crisis," he wrote.

"The surprise president claims he does not believe in climate science nor the threats it presents and his actions and words reflect that claim in tangible and dangerous ways."

Read the full statement signed by Neil Young and Daryl Hannah below:

Tales of a feast on Plymouth plantation in the Autumn of 1621, where of pilgrims from the Mayflower, celebrated the harvest, shared and broke bread with the first Americans are false. They are still used as inspiration and shared with children, teaching them the beauty of gratitude.

But it is now widely understood this Thanksgiving story is a fictional history. It was invented to whitewash the vicious genocide wrought upon the native inhabitants of this magnificent continent. Not only did the Europeans try to eradicate native populations, but they made every effort to eviscerate their culture, their language and eliminate them from these coveted lands.

From Plymouth Rock to Standing Rock, this lie has made our Thanksgiving Day a Day of Mourning for the First Nations, all the tribes big and small, those who came before us.

A few weeks ago we traveled to visit the Standing Rock Sioux In North Dakota. We arrived at this unprecedented historical gathering of over five hundred tribes and thousands of others standing on the front lines to protect water, to state the most basic human truth, to say water is life. Despite the painful history, today they fight peacefully for us all.
The camp grows as winter comes. Standing in protection of our most vital life support systems, but also for the rightful preservation of Native American cultural ways and their sovereignty. Everyone we talk with is committed to peaceful resistance. Weapons alcohol and drugs are forbidden there.

Standing together in prayer to protect water displays a deeply rooted awareness of life's interconnected nature, and of the intrinsic value and import of traditional ways. This growing movement stems from love, it is the most human instinct to protect that which we love. An eager and engaged youth are at the core of this pipeline route resistance, learning from a population of elders who pass down unforgotten knowledge.

It is an awakening. All here together, with their non-native relatives, standing strong in the face of outrageous, unnecessary and violent aggression, on the part of militarized local and state law enforcement agencies and National Guard, who are seemingly acting to protect the interests of the Dakota Access Pipeline profiteers, at a cost of hundreds of thousands of tax-payer dollars, above all other expressed concerns. They stand against corporate security forces, the county sheriff and the National Guard. Standing while being hit with water cannons, mace, tear gas, rubber bullets. Standing without weapons and praying, the water protectors endure human rights abuses in sub freezing temperatures. Supplies arrive from all over as the social media universe shares the heartbreaking news to the world, that an American corporate media is not free to report. Thus, it is the ugliness of corporate America, seen around the world.

But they stand, their hair frozen from water cannons. They stand for all that is good and they stay strong.
We are calling upon you, President Barack Obama, to step in and end the violence against the peaceful water protectors at Standing Rock immediately.

We will be going back to support the water protectors again. Let us all stand with them in thanks, in appreciation for the ancient wisdom they carry, In thanks for this opportunity for true gratitude. For giving us a path forward. For trying to show us a road to survival. We offer our support and our respect. We hear the call to protect the water protectors to listen, learn and get engaged. They are brave. We thank them.

And we can give thanks for the bounty.

Like water on the garden of activism, America’s surprise president brings a bounty of opportunity. The great issues of our time are now brightly illuminated and people are becoming more aware of them than ever, from sea to shining sea, from Standing Rock to Wall Street.

The surprise president elect was not the winner of the popular vote, does not have a mandate for the change of ideals envisioned. Keep in mind, close to over two million more people voted for another candidate.

Nor is the surprise president the leader of the free world. Two hundred of the worlds nations believe in science, above the profits of the oil, gas and coal industries, and are committed to working together to protect the future from an unchecked climate crisis.

The surprise president claims he does not believe in climate science nor the threats it presents and his actions and words reflect that claim in tangible and dangerous ways.

Do not be intimidated by the surprise presidents' cabinet appointees as they descend the golden escalator. Those who behave in racist ways are not your leaders. The golden tower is not yours. The White House is your house.

Your growing activism in support of freedom over repression, addressing climate change, swiftly replacing a destructive old industries with safe, regenerative energy, encouraging wholistic thinking in balance with the future of our planet; that activism will strengthen and shed continued light on us all. These worthy goals must be met for the all the worlds children and theirs after them.

This is our moment for truth.