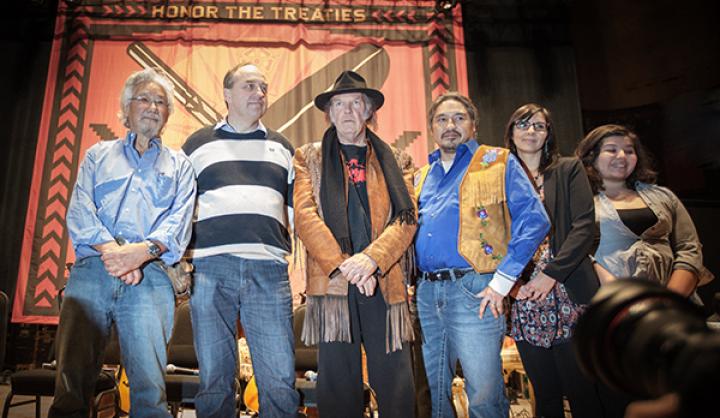 Neil Young has announced a new "Honour The Treaties" benefit concert to support the Athabasca Chipewyan First Nation Legal Defense Fund. Set for July 3 at Rexall Place in Edmonton, Alta., proceeds from the concert will go towards the Athabasca Chipewyan First Nation (ACFN), executing legal challenges against oil companies and governments that are obstructing their traditional lands and rights.

Athabasca Chipewyan First Nation Chief Allan Adam explained what the money raised by the Young concert will be going towards.

“The ACFN are continuing our legal challenges to stop out of control Tar Sands development from destroying our traditional territory and rights as Indigenous peoples," said Adam in a press release announcing the Edmonton show. "With the support of Neil Young and fans we are creating more accountability from our governments for the safe guarding of our lands, rights and future generations in Alberta, Canada and beyond. Our people, our climate and our planet can no longer afford to be economic hostages in the race to industrialize the earth. We must act now for the future generations.”

One example of the Athabasca Chipewyan First Nation's fight is the $3 billion Grand Rapids pipeline project which the ACFN is concerned may destroy parts of their traditional hunting and fishing territory. When the ACFN asked for 18 months to comprehensively study the effects of the proposed pipeline before its approval, the Alberta Energy Regulator countered they would only get one day. The pipeline was approved and the band is now fighting to overturn that approval.

Young's support of the Athabasca Chipewyans is part of a larger campaign to against oilsands development the veteran rocker started in 2013 when he compared the oilsands producing region around Fort McMurray, Atla. to Hiroshima because of its damaged environment.

"Canada should be ashamed of the Alberta Tar Pits," Young said on his website in 2013 while discussing the value of biofuel and his hybrid automobile project, the LincVolt.

Young backed up his tough talk in 2014 with a four show "Honour The Treaties" tour accompanied by Diana Krall.

The latest Honour The Treaties show continues a long tradition of activism from Young. "Ohio," one of Young's earliest hit songs as part of Crosby, Stills, Nash and Young, condemned the shootings at Kent State University in 1970. In 1985, Young, Willie Nelson and John Mellencamp created the annual Farm Aid benefit concert to help farmers combat mortgage debt. He recently teamed up with the Rainforest Connection, an organization that repurposes old cell phones as surveillance devices to protect the rain forests. And his forthcoming album The Monsanto Years is, in part, a musical articulation of his feud with Starbucks for using genetically modified ingredients.