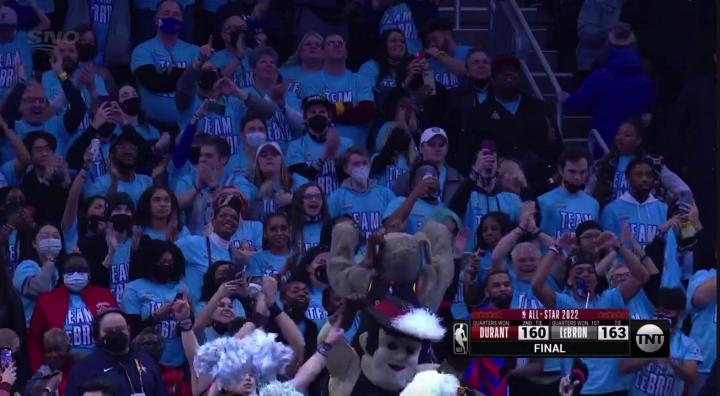 Two Akron, Ohio-born players were among the biggest names playing in the NBA All-Star Game in nearby Cleveland on Sunday (Feb. 20), but the biggest winners may have been the charities and organizations that benefitted from the exhibition and its associated events — to the jump of millions.

The NBA and State Farm also donated $1,900 for every assist made during the game, with the total amount split between the two beneficiaries.

The I Promise program is part of The LeBron James Family Foundation, which supports more than 1,400 Akron students in grades three through 10 through mentoring, college and career preparation, and wrap-around family support.

Kent State’s I Promise Scholars Program provides higher education opportunities and support for underserved I Promise students in northeast Ohio. The funds raised by Team LeBron will support important educational expenses such as books, supplies, room and board, and other needs that are critical to the success of I Promise students.

The Greater Cleveland Food Bank is the largest hunger relief organization in northeast Ohio. With its more than 1,000 partner agencies in six counties, it served almost 350,000 people and provided food and non-food benefits to those in need last year.

James hit the game-winning shot and his side also had the highest scores in the first and fourth quarters to receive $450,000 to donate to Kent State’s I Promise Scholars Program. Team Durant won the third quarter and the two squads tied in the second quarter, resulting in the team receiving $300,000 for the Greater Cleveland Food Bank.

Kia Motors pledged to donate a Kia Sorrento to the charitable organization of the winning team, so Kent State’s I Promise Scholars Program also received that. 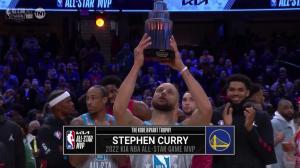 “It’s pretty special being back in Ohio and playing with the best guys in the league and celebrating the highest level of basketball,” said Curry. “Obviously this trophy has a very special meaning, honouring Kobe and Gigi and everyone else two years ago. I’m very humbled and very blessed and I really appreciate it.”

Curry also pledged to personally donate $1,000 for every point he scored, $3,000 for every three-pointer he made, and $10,000 if he won all-star game MVP honours to the Cleveland Metro School District. His big game added up to $108,000 in donations.

Curry Brand has a mission to create opportunity, access and equality for youth sports around the world.

NBA great Kobe Bryant and his 13-year-old daughter Gianna (nicknamed Gigi), along with seven other people, were killed in a helicopter crash in California on Jan. 26, 2020.

The retired Lakers star was also involved with Her Time to Play, an initiative developed by the WNBA women’s professional basketball league and the NBA that’s dedicated to championing change on behalf of girls and women and providing them with ways to connect, collaborate and actively engage with one another through basketball.

The WNBA and Kobe’s widow Vanessa presented the inaugural Kobe and Gigi Bryant Advocacy Award to Phoenix Suns guard Chris Paul on Sunday for his significant contributions to the advancement of girls' and women's basketball, and advocacy for the WNBA.

The WNBA will also make a donation to the Mamba and Mambacita Sports Foundation, a non-profit organization dedicated to creating a positive impact for underserved athletes and boys and girls in sports.

As part of the weekend’s NBA All-Star 2022 activities, the NBA and National Basketball Players Association (NBPA) agreed to work alongside local community organizations to provide programming and support that focus on youth, education, health equity, food insecurity and economic inclusion.

The NBA will contribute more than $3 million to historically black colleges and universities (HBCU), which were established prior to the Civil Rights Act of 1964 being passed in the United States, in Greater Cleveland.

The first-ever NBA HBCU Classic presented by AT&T was played between men’s basketball teams from Howard University and Morgan State University at Cleveland’s Wolstein Center and simulcast on TNT, ESPN2 and NBA TV on Saturday.

As part of the NBA’s and AT&T’s respective ongoing commitments to HBCUs, they’re donating $100,000 to each school to support the student experience. Both teams met after the game with NBA league and team executives to participate in programming regarding professional development, networking and the impact of HBCUs on society.

Ten local HBCU college students also served as NBA interns throughout the weekend as part of the HBCU Event Shadow: All-Star program. They worked alongside a variety of league office departments to learn how each contributes to the planning and execution of the NBA All-Star 22 events.

The NBA also showcased artwork from students from Central State University in Wilberforce, Ohio that centred around their HBCU experience and sports. The art was displayed at Cleveland’s Rocket Mortgage Fieldhouse, the Wolstein Center and in NBA player hotels.

In continued support of scholarships and other resources for HBCU students, the NBA Foundation will make grants of $250,000 each to the Thurgood Marshall College Fund and United Negro College Fund. The foundation has provided $1.5 million in grants to non-profit organizations supporting the greater Cleveland community to date.

As part of its newest round of funding, the foundation will award new grants totalling $1.3 million to the Greater Cleveland Partnership, NeoSTEM’s Envision Excellence in STEM Education, The Presidents’ Council Foundation and Youth Opportunities Unlimited, and renewed grant funding for the Marcus Graham Project. The foundation has also made investments in Cleveland branches of City Year, the National Urban League and the National Black MBA Association.

NBA Cares was launched in 2005 as the league’s global social responsibility program that executes the association’s mission of addressing important social issues.

Volunteers participated in the 14th annual NBA Cares All-Star Day of Service — presented by Nike, SAP and State Farm — on Feb. 18. They sorted and packed food donations at the Greater Cleveland Food Bank and gently used books with Kids’ Book Bank Cleveland to support thousands of children, seniors, families and other individuals in need.

The Cleveland Cavaliers and the NBA have supported Cleveland mayor Justin Bibb’s efforts to encourage vaccinations, boosters and health education by providing incentives for those who receive a COVID-19 vaccine or booster shot at sites throughout the city, including tickets to NBA All-Star 22 events and Cavaliers games, merchandise, autographed items and more.

The league also supports city-wide vaccination and testing efforts through additional vaccination locations, and donating 10,000 rapid antigen tests and 110,000 face masks to the local COVID-19 taskforce for distribution to schools and community-based organizations. A $100,000 donation will be made to the Funders Collaborative on COVID Recovery — a partnership that includes nearly 50 philanthropic foundations and non-profit and government entities — to help support the community as it recovers from the economic and social impacts of COVID-19.

With a focus on economic inclusion and supporting Cleveland’s recovery efforts from the ongoing effects of the pandemic, the NBA included more than 130 diverse-owned businesses as part of the NBA All-Star Rewards Program that was launched last August. The program encouraged fans to patronize locally owned restaurants and retailers for the chance to win tickets to attend NBA All-Star 22 events and other prizes.

The NBA also engaged more than 30 women-, minority- and LGBTQ-owned businesses through its supplier diversity program to be vendors during NBA All-Star 2022.

The NBA also worked with the Cavaliers and other partners, including KultureCity and South Pole, to make NBA All-Star 22 inclusive, accessible and environmentally responsible.

This is the NBA’s 75th season and, in partnership with Kaiser Permanente, it created the NBA 75th Live, Learn or Play Initiative to create and dedicate more than 50 centres that range from new education and technology rooms, basketball courts and play spaces to home refurbishments. The 2,000th NBA Cares Live, Learn or Play Center was dedicated in Cleveland over the weekend as part of NBA All-Star 2022.

The first NBA Cares Live, Learn or Play Center was unveiled in 2005. Kaiser Permanente has supported the NBA’s efforts to build stronger and healthier communities since 2015 by partnering on health-related content and year-round health and wellness programs, including through the league’s NBA FIT, Jr. NBA and elite youth development programs.