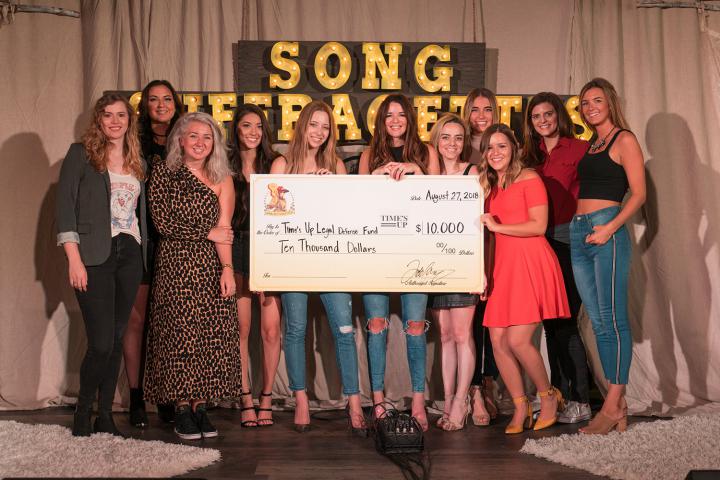 A group of female Nashville-based musicians and male supporters known as Song Suffragettes donated $10,000 (USD) on Aug. 27 to an organization that is working to excise sexism and sexual violence from workplaces. The money was raised through digital sales and streaming revenue from their song “Time’s Up,” for organization that inspired it – the Time's Up Legal Defense Fund.

Nashville music executive Todd Cassetty, founder of Song Suffragettes and a talent consultant for America’s Got Talent and American Idol, said, “As the song and music video continue to be embraced, we look forward to writing even more checks to the Time's Up Legal Defense Fund. Hopefully more media outlets and social media influencers will continue to help spread the word about the song, the organization and most importantly, discrimination issues against women.”

The Song Suffragettes is a collective of female singer/songwriters that perform every Monday night at The Listening Room Café in Nashville, Tennessee. According to the press release announcing the donation, in a little over four years, Song Suffragettes have showcased more than 200 women out of a total of over 1,3000 who have submitted to play in the showcase. 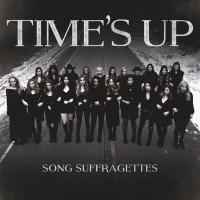 “Time’s Up” was penned by CMT Next Women of Country members Lacey Green, and Kalie Shorr who co-produced the song in January with John Caldwell, and released it with a companion video by Cassetty, Qunton Cook and Helena Capps.

The lyrics address gender inequality and sexual misconduct against women – the same goals as the Time's Up organization, which was formed as an offshoot of the viral #MeToo movement that has become a rallying point for women seeking justice and change in not only workplace culture, but the culture in general as it regards sexual misconduct.

The Time's Up organization officially commented on the song and the donation in a press release issued on behalf of Song Suffragettes.

“We are inspired by the Song Suffragettes’ commitment to addressing gender inequality across the music industry and we are so grateful for their support of the Time's Up Legal Defense Fund, which connects those who experience sexual misconduct and related retaliation in the workplace with legal and public relations assistance,” it read.

“Time's Up is an organization that insists on safe, fair and dignified work for women of all kinds. We want women from the factory floor to the floor of the Stock Exchange to feel linked as sisters as we shift the paradigm of workplace culture,” said a statement on the organization’s website.

“Powered by women, Time's Up addresses the systemic inequality and injustice in the workplace that have kept underrepresented groups from reaching their full potential. We partner with leading advocates for equality and safety to improve laws, employment agreements, and corporate policies; help change the face of corporate boardrooms and the C-suite; and enable more women and men to access our legal system to hold wrongdoers accountable.”

On the Song Suffragettes web page, it reads:  “With a mantra of #LetTheGirlsPlay, Song Suffragettes vocally combats widespread discrimination against women in the music industry by giving female talent a place to play, grow and evolve with fellow creatives.

“Since its inception, 11 Song Suffragettes women have gone on to receive record deals and almost 40 have landed music publishing deals. With over two million views on their YouTube channel and a strong social media following, Song Suffragettes continues to fight for female talent to be heard throughout the country [United States] and beyond.”