Multi-Artist “Lean On Me” Single And Video Supports Red Cross 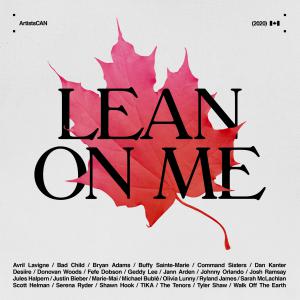 A cover of Bill Withers’ classic song “Lean on Me,” performed by more than two dozen Canadian music artists brought together by ArtistsCAN, is raising money for the Canadian Red Cross.

“Lean on Me” had its world premiere on the record-breaking April 26 Stronger Together, Tous Ensemble broadcast that raised more than $6 million for Food Banks Canada in 24 hours.

Viewership of Stronger Together, Tous Ensemble peaked at more than 6.1 million during the airing of the “Lean on Me” video produced by The Young Astronauts.

ArtistsCAN was founded in April by JUNO Award-nominated artists Tyler Shaw and Fefe Dobson — along with musician, songwriter and producer Dan Kanter — to raise funds for COVID-19 relief in Canada. Its goal s to connect the artist community with charitable organizations to further help their causes through the arts

“ArtistsCAN is true artist-to-artist connection,” said Dobson in a media release. “We’ve come together to help how we can. We know there are a lot of people who are struggling, who have lost their jobs, who can’t financially contribute.”

All proceeds from “Lean on Me,” conceptualized by Shaw and Dobson, support the Canadian Red Cross’ Canadian Emergencies & COVID-19 Response Fund.

“When I heard of Bill Withers’ passing, I was listening to all his legendary music, and I really dove into the lyrics of ‘Lean On Me,’ a song I’ve heard hundreds of times, but now in this current climate, the lyrics seem more profound than ever,” said Shaw in a release. “I wanted to cover it; I wanted to help. I called Fefe, we called more people, and more people. And in a really short time we had this incredible song, with a message I think people need to hear right now, all while raising money for something every single one of us is affected by.”

People can contribute to the fund by streaming the song, viewing the music video or downloading the single. They can also make a monetary contribution by texting LEANONME to 20222 or donating on the fund’s website.

The “Lean On Me” single and video are available to purchase on digital retail platforms and can be streamed here.

The Canadian Red Cross’ mission is to improve the lives of vulnerable people by mobilizing the power of humanity in Canada and around the world. It’s part of the largest humanitarian network in the world, the International Red Cross and Red Crescent Movement.

Money donated to the Canadian Emergencies & COVID-19 Response Fund will be used wherever the Red Cross decides the current need is greatest.