The Motivation Behind the Mariachi Party Protest Against Racist Lawyer Schlossberg 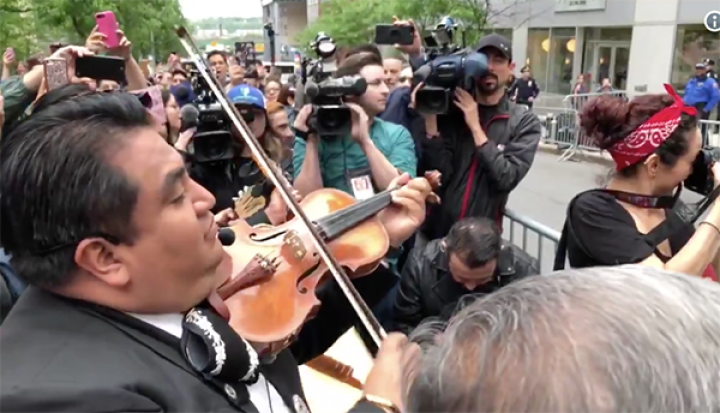 Aaron Schlossberg, the New York lawyer caught on camera making racist threats, was serenaded by a mariachi band and 500 revellers outside his residence on May 18. "We are countering hate and racism with the sound of music," organizer Mark Goldberg, who set up a Gofundme page to pay for the band, wrote. He also suggested donating to the Immigrant Defense Project.

"Raising $500  to send a Mariachi band to cheer up the staff and attorneys at The Law Office of Aaron M. Schlossberg Esq. P.L.L.C. after a difficult day," the post reads. "We are requesting the band to sing the famous, endearing, and warm spanish children song, La Cucaracha, the cockroach. We are countering hate and racism with the sound of music. Any leftover money will be used to send a delicious Taco Truck lunch to the staff and a copy of all federal and state statute mentioning undocumented immigrants do not qualify for welfare.

"Thanks to Alt Immigration ( @ALT_USCIS on twitter) for the idea and the tweets. https://twitter.com/ALT_uscis," he concluded, humoursly adding, "Let us know when you want to raise funds to send Kebab to Trump officials in prison."

Schlossberg went on a racist tirade on May 16 in a Manhattan deli. The lawyer was upset that employees in the eatery were speaking Spanish. He threatened to call Immigration and Customs Enforcement (I.C.E.) officials on the employees, saying, "If they have the balls to come here and live off my money—I pay for their welfare. I pay for their ability to be here. The least they can do … is speak English."

His rant was caught on video, and went viral, and was covered extensively by the media. It was apparently not the first time he had gone off the rails in public about immigrants or people he perceived to not to be America.

"Mariachis For Aaron Schlossberg" GoFundMe page quickly reached its goal $500 USD ($639 CAD) goal — actually raising $1,094 USD ($1398 CAD) — before closing the funding campaign. "We are no longer accepting more donations. It is enough to get the purpose of the gofundme completed. If you want to donate please consider https://www.immigrantdefenseproject.org," reads "update 8."

With a mission to "to secure fairness and justice for immigrants in the United States," the Immigration Defense Project aims to "abolish a racially biased criminal legal system that violates basic human rights and an immigration system that every year tears hundreds of thousands of immigrants with convictions from their homes, their families, and their communities."

The organization does things like provide expert advice, advocate for more fair immigration legislation and work in communities affected by immigration policies.
Two days after the GoFundMe campaign was launched, a five-member mariachi band performed in front of Schlossberg's West 60th Street apartment building to over 100 supporters and free duck tacos provided by the Upper East Side Asian restaurant Jade Sixty.
困ったらここ！実家暮らしカップルの定番デートスポット5選