Monster Truck Are 'For The People' With New Throwback Animated Video 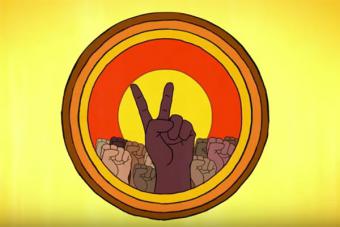 In these troubled political times, Hamilton, Ontario rock band Monster Truck have weighed in musically on who they support.

The band have released a new animated video for their song "For The People," which pointedly declares "We will rise up, To fight your evil, We the people, Will overcome."

Described as "politically empowering, yet non-partisan," the song "For The People" could easily have been recorded in 1972 with its retro-rock vibe and its message of wanting to live in peace.

"We wanted the video to capture a certain vibe," said Monster Truck lead vocalist/bassist Jon Harvey in a release. "The song was intended to be a pseudo-protest and very roots rock. The ‘70s animation seems to speak to that. Besides, nothing is cooler than hand-drawn animation. The illustrators and animators executed it perfectly."

The video was directed by Toronto’s Kyle Griblin illustrated by Brett Lamb, Leslie Supnet and Eric Kim and animated by David Mayzis, Les Solis and Greg Zajac. It features a '60s style series of kaleidoscopic images that include multicoloured raised fists, peace symbols, hearts and a technicolour monster truck cut against images of soldiers fighting and politicians arguing with each other.

This isn't the first time the hard rockers Monster Truck have shown they've got their hearts in the right place. Last year the band decided to sponsor a girls hockey team.

The band will be touring across Canada in early 2017 in support of Billy Talent.

Watch the "For The People" video: