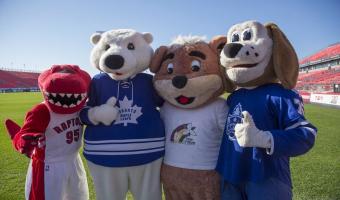 Former Toronto Maple Leafs hockey players Wendel Clark and Peter Ing got together last week, but it wasn't to talk about the glories of the 1990-91 NHL season they played together. Instead, it was to celebrate a milestone for the charitable team sport competition the MLSE Team Up Challenge, which has hit $1 million in fundraising for its upcoming event to support Camp Trillium.

Taking place on June 12 at Toronto's Downsview Park, the MLSE Team Up Challenge pits teams of 10 in a tournament where they have to prove their mettle in multiple sports by playing a combination of soccer, hockey and basketball games. Additionally, teams are expected to fundraise a minimum of $5,000 in order to participate. To incentivize participants, former athletes, including many who've played for MLSE sports teams (the Leafs, the Toronto Raptors basketball team, the Toronto FC soccer team) in the past, act as "celebrity" coaches. Last year Clark was joined by, amongst others, fellow former Leafs Darryl Sittler, Shayne Corson, Darcy Tucker and Johnny Bower, along with former TFC player Dwayne De Rosario and former NBA all-star Jamaal Magloire.

Camp Trillium, which serves approximately 150 families per year, is the only camp in North America offering and promoting recreational experiences to for children living with cancer and their families. Operating one camp near Picton, Ontario and another near Waterford, Ontario, Camp Trillium provides not only a full, free camp experience for children with cancer, but also makes a point to provide recreational opportunities for the siblings of children with cancer as well as the valuable opportunity for parents to get some much needed rest and relaxation as well.

In addition to the two camps, Camp Trillium also runs 54 local community programs like day camps, clinic programs at hospitals and health care facilities and leadership programs. These are funded by donations from individuals, service clubs, businesses, and foundations.

"When a child gets cancer it’s incredibly destructive for the whole family," said Marci Shea-Perry, Executive Director, Camp Trillium, on the MLSE Team Up Challenge website. "At Camp Trillium, they can meet other families who are going through or have gone through the same thing. They can swap tips and information but they can also listen and learn and take comfort from each other."

Right now registrations are still being accepted for teams interested in participating in the MLSE Team Up Challenge. Additionally, the event is also soliciting for volunteers to help out.