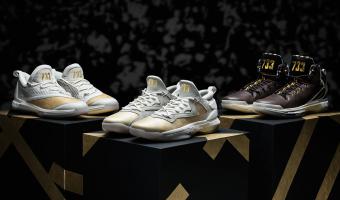 Monday, Jan. 18 is Martin Luther King, Jr. Day in the United States, a federal holiday to celebrate the late nonviolent activist's efforts to promote peace and racial harmony in the 1960s.

The purpose of the day is to further King Jr.'s dream.

"The King Holiday honors the life and contributions of America’s greatest champion of racial justice and equality, the leader who not only dreamed of a color-blind society, but who also lead a movement that achieved historic reforms to help make it a reality," says his wife Coretta Scott King on The Martin Luther King, Jr. Center for Nonviolent Social Change's website.

Nike's Black History Month collection will feature signature editions of their Lebron 13, KD8, Kyrie 2 and Kobe 11 shoe models used by NBA stars like Lebron James, Kyrie Irving and Kevin Durant. Additionally, Nike's Black History Month collection includes a line of themed shirts, shorts, hats and other activewear. Nike says the collection was designed to honors and celebrate Black heritage in sport and beyond. Additionally, Nike will be contributing to its Ever Higher Fund, a grant-funding arm "created to bring mentorship, sport and all of its benefits to African-American youth."

The Ever Higher Fund uses Charities Aid Foundation of America to vet all its grant requests and recipients on its behalf and has partnerships with the likes of the Jackie Robinson Foundation, Boys And Girls Clubs, National Head Start and Coach Across America. The Ever Higher Fund has raised more than $2 million U.S. ($2,920,200 Canadian) since 2014.

"The Owens family is pleased to partner with Adidas for Black History Month with a commemorative basketball shoe," said the Owens family in a press statement. "On the feet of athletes who compete in the spirit of Jesse's historic accomplishments, these shoes encompass the significance of one of the greatest athletes the world has ever seen."

NBA stars James Harden, Damian Lillard and Derrick Rose will be among the players debuting the exclusive collection during the Martin Luther King Jr. Day games and will also wearing the shoes in select games throughout February.

Adidas has partnered with the Jesse Owens Foundation in creating the collection. The learning focused foundation "has chosen educational programs via scholarships as the major vehicles for creating a living memorial to Ruth and Jesse Owens, in part because of Jesse's own reliance on financial aid as a student."

Stance, the official sock provider for the NBA, will be debuting its Stance BHM NBA sock. The sock features a nod to the year MLK was born, 1929, on its footbed and will also be worn by NBA players from February 1 to February 11

There've been other NBA-related MLK initiatives as well.

The Memphis Grizzlies have hosted a weekend's worth of MLK-related events leading up to their game against the Pelicans. Memphis was the city where King was assassinated in 1968 at age 39.

Additionally, in King's hometown of Atlanta TNT’s Inside the NBA crew will be broadcasting from the Martin Luther King, Jr. Center for Nonviolent Social Change throughout the day and will include interviews with the likes of King’s son, Martin Luther King III, Hall of Famer Kareem Abdul-Jabbar and civil rights activist and former ambassador Andrew Young.