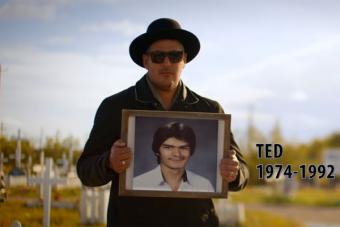 Hailing from Attawapiskat, a remote Indigenous community on the western side of James Bay, Midnight Shine are all too familiar with these crises. In 2016 a state of emergency was declared in Attawapiskat after 11 people attempted suicide in a single day in the community of 2,000. A cascading series of causes contributed to the crisis, including crowded living situations, bullying, physical, sexual and drug abuse and the lingering destructive impact the residential school system had on the community.

The video starts off with a message saying, "Suicide rates are 5 to 7 time higher for Canadian First Nations youth than for non-indigenous youth. Suicide rates for Inuit youth, at 11 times the national average, are among the highest in the world." From there Midnight Shine lead singer Adrian Sutherland is filmed in various locations in and around Attawapiskat while photographs of young people who've taken their own lives are shown on screen.

"I wrote I Need Angels because there are a lot of people struggling in Canada’s Indigenous Far North communities. We’ve had a lot of loss, a lot of tragedies, and I think it’s important for me as an artist to shed light on these issues,” said Sutherland, in a statemetn.

"Being isolated in the North can be very tough, and I know a lot of people who suffer from depression. The song is about that inner struggle to keep positive and not give up, and to hang on to hope and faith despite the darkness."

The song was co-written by band members Sutherland, Zach Tomatuk and Stanley Louttit and was produced by The Trews' John-Angus MacDonald. The song is from Midnight Shine's recent album High Road and is also available as a free download via the band's Soundcloud page.

Watch the "I Need Angels" video