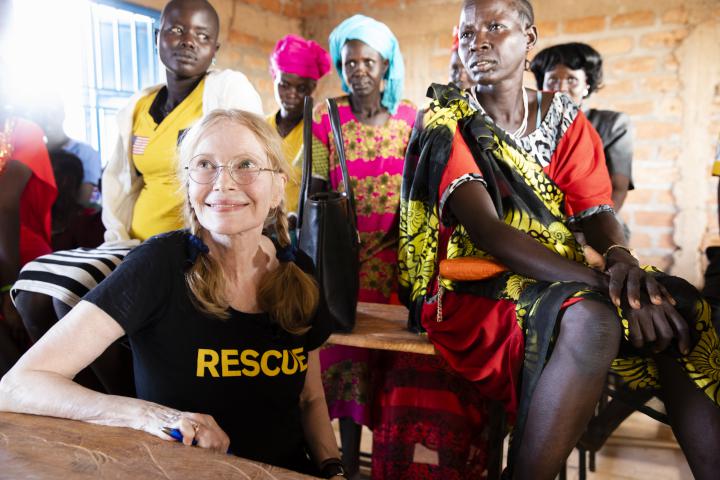 Mia Farrow has called for the world to do more to tackle child malnutrition after a visit to war-torn South Sudan.  The actress and ambassador for the International Rescue Committee (IRC) called on world leaders, United Nations agencies, non-governmental organizations and world governments to collaborate on measures to increase access to treatments for children.

Her appeal followed a visit to health programs by the International Rescue Committee, which helps people survive and recover from global conflicts and disasters, in part by providing primary health care. That includes nutrition programs to battle against the impact of child malnutrition and to protect the health of women and children in crisis zones.

“The expectation is that 860,000 children will suffer from acute malnutrition in South Sudan this year, roughly half of whom cannot access treatment. South Sudan is not alone – this number is symptomatic of a global failure to address this life threatening condition. We risk losing entire generations. Solving this crisis is one of the biggest humanitarian opportunities I’ve seen in over 20 visits to sub-Saharan Africa. It’s so obvious that a new approach is needed," Farrow — who has been to South Sudan on four previous visits — said in a statement.

During Farrow’s her visit, Farrow toured sites in Unity state where the IRC aims to increase access to nutrition treatment. She met with community health workers diagnosing and treating malaria, diarrhea and pneumonia and visited clinics where children can access malnutrition treatment -- but where weakened mothers must travel on foot for up to 8 hours to reach them.

“The current system forces mothers to walk hours or even days through oppressive heat or pounding rain to reach a clinic for their children. Too many children don’t survive the journey and it’s a perilous one for the mothers too. This is needless," Farrow said, urging community health workers to offer nutrition and other health treatments in the homes and villages of women and their children.

The IRC, on its website, points to 51 million children worldwide suffering from acute malnutrition every year, of which 80 percent do not have access to proper treatment. The charity added that extreme hunger and poor nutrition, while life-threatening for children in war and disaster zones, is treatable.

"Treating malnutrition and protecting nutritional status for women and children are some of the most effective ways to improve growth and development in children.  But for millions in crisis-affected areas, access to critical services and resources remain out of reach, changing the course of a lifetime," the IRC states.

Of the lasting impact of poor nutrition, it states, "In crisis settings, mothers and children lack access to nutrient-dense foods. For children, this can lead to night blindness, poor immunity to severe infections, and a restricted ability to grow and learn. “

The IRC currently has around 480 staff in South Sudan, providing primary health care and women’s and child's protection and livelihoods programs. The IRC estimates that it serves around 900,000 people in South Sudan.

Farrow’s declaration also comes as international efforts, including by the Vatican, are being made to possibly end a South Sudanese civil war that started in 2013 and has caused a steep death toll.