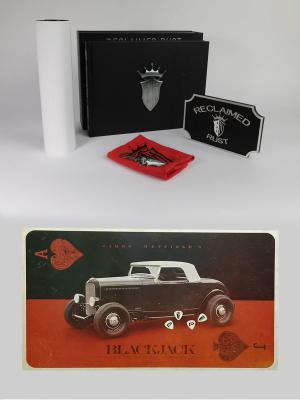 Metallica frontman and car collector/restorer James Hetfield is holding a sweepstakes to win a limited edition box set of his new book on his classic car collection, with 100 percent of the proceeds from each entry going to the metal band’s All Within My Hands organization to support automotive technology programs funded by the Metallica Scholarship initiative.

The coffee table book, Reclaimed Rust: The Four-Wheeled Creations of James Hetfield, offers a look at his customized classic car collection, which is currently on display at the Peterson Automotive Museum in Los Angeles. The photographs are by Scott Williamson.

The prize includes the coffee table book featuring the Reclaimed Rust metal shield on the leatherette book cover, measuring 12" x 9", and 192 pages in length; a numbered, deluxe clamshell case; a signature card personally signed by Hetfield; four lithographs featuring images of the Black Pearl,  the Skyscraper, the Aquarius, and the Slow Burn (all cars included in the book); a metal car plaque; shop towel, keychain.

That’s all in the box set, valued at $300, but the winner will also receive an original poster featuring the Blackjack (one of the vehicles featured in the book) along with commemorative guitar picks, both created for the show at the Petersen Automotive Museum.

AWMH, set up I 2017 by the band’s Hetfield, drummer Lars Ulrich, guitarist Kirk Hammett and bassist Robert Trujillo, along with their management,  supports local charities offering workforce education and tackling hunger, including as part of an alliance with Feeding America.

The Reclaimed Rust book sweepstakes is specifically designed to support the Metallica Scholars Initiative, which supports job training for community college students looking for opportunities in trade or other applied learning program, and in this case automotive technology programs.

The Metallica Scholars program, launched in 2019, gave ten U.S. colleges $100,000 each in its first year to support over 700 students training for jobs in the technical trades.

"Our 2019 Metallica Scholars have exceeded expectations and inspired us in more ways than we could have possibly imagined. We’re really excited to be able to expand the initiative in its second year, assisting more students in achieving their dreams and transforming their lives in 2020," Ulrich says in a statement on the foundation's website.

The Metallica Scholars program was expanded to support 15 total schools in 2020 with in all $1.5 million in donations.

"The foundation and the band are thrilled by the quality of proposals we received from these colleges, and are excited to do our part to help educate students so that they have the skills and training necessary to find meaningful and well-paying jobs in their communities," Dr. Edward Frank, executive director of AWMH, said in a statement in Dec. 2018, when the program was first announced.

The Metallica Scholars program is a partnership between the AWMH foundation and the American Association of Community Colleges, which represents around 1100 U.S. community colleges.  The colleges that received support from the Metallica charity were often in communities that supported the heavy metal band's U.S. tours.  The grant funds from the Metallica Scholars program provide scholarships and services for students in the community college programs.