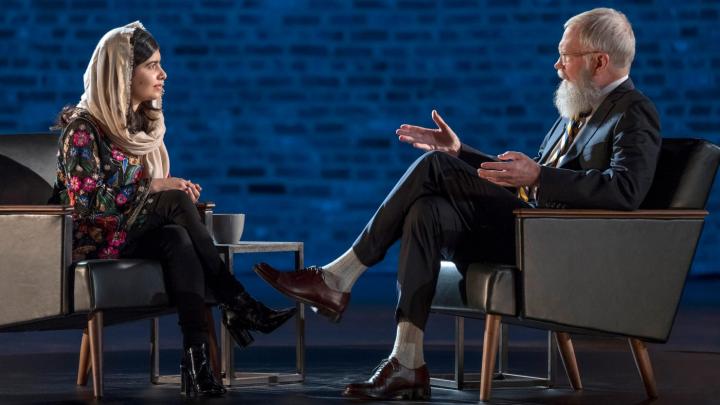 Nobel Prize-winning activist Malala Yousafzai used her appearance on David Letterman's My Next Guest Needs No Introduction program to promote women's education and equality, while confronting extremism and America's uneven human rights record while President Donald Trump has been in power.

Yousafzai, 20, won her Nobel Prize in 2014 for campaigning for the right of all children to receive an education. Born in Mingora, Khyber Pakhtunkhwa, Pakistan, when she was a pre-teen Yousafzai contributed blog reports for the BBC about what life was like in the Taliban-occupied area of Pakistan where she lived. In October 2012, when she was 15, a Taliban gunman attempted to assassinate her for her activism, hitting her with a bullet that struck her head, neck and shoulder. Since recovering, Yousafzai has become an even more prominent activist, to the point where German public broadcaster Deutsche Welle called her the most famous teenager in the world.

She used her time with Letterman to repeatedly reinforce the important of providing an education for girls and women, particularly those who are impoverished and with less means.

"The governments need to invest more money into education. Business people, everyone who is part of society, they need to start thinking about investing in girls and their education. We just need an ambition and an intention. What to do is then easy," said Yousafzai, who pointed out that improved access to education isn't just a humanist issue, but that a better educated population improves the economy, creates healthy populations and reduces extremism.

Prompted by Letterman, whose new Netflix program has previously featured Barack Obama and George Clooney as guests, Yousafzai explained how she hoped people would react to extremists of all stripes.

When Letterman asked Yousafzai for her opinions on Trump she deftly turned the question around on him, explaining that she wasn't an American citizen, so it was Letterman's opinion that would be more relevant in this circumstance. Letterman responded by saying Trump was unfit to represent him.

At that point Yousafzai talked about the unfairness of Trump's "Muslim ban."

"A ban on Muslims! And I’m a Muslim," she said. "Some of the things have really disappointed me, things about sexual harassment and a ban on Muslims and racism. You see all these things and you feel that America, being known for human rights and a country of liberty and freedom, that country should be leading in terms of human rights."

Showing exactly why she's the sort of person that deserves a Nobel Prize, Yousafzai then explained what she thought of the people who attacked and shot her.

"The people who targeted me and who attacked me, I forgive them," she said. "Because that's the best revenge I can have... I think we need to help people because they're just people like us."

Yousafzai, who studies at Oxford University in London, also spoke about how she had visited Jordan and Lebanon to see firsthand what sort of education Syrian refugees had been receiving. She also said she had been to Nigeria and Kenya and was working to improve educational opportunities in Asia and Latin America as well. Mostly, though, she said she hoped that her efforts would empower more local leaders and young girls in their communities to improve their worlds.

"I want to see more and more girls getting quality education, getting empowered and becoming the leaders of today and tomorrow," she said.