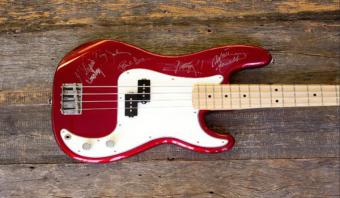 Canadian rock legends Loverboy, whose hits “Working for the Weekend" and “Lovin’ Every Minute of It" are still a staple at radio have two hot items up for auction on the IfOnly, which close Friday, August 4 at 1 p.m. PT.

A red Fender Precision Bass and a "Working For The Weekend" lyric sheet autographed by the five members of Loverboy — Mike Reno, Paul Dean, Matt Frenette, Doug Johnson, and Ken Sinnaeve — will go to the highest bidder.

The starting bid for the bass is $500, according to If Only and "Working For The Weekend" can be yours for the "buy now" price of $150. Proceeds from the sale of these two items will go towards Type 1 Diabetes (T1D) research.

The band have a long history of supporting diabetes-related causes. Loverboy guitarist Paul Dean, whose son has been diagnosed with T1D, helped launch the annual Rockin' For Research benefit which takes place in Vancouver each year. Now in its eighteenth year, that event raises money for the Juvenile Diabetes Research Foundation (JDRF).

The Juvenile Diabetes Research Foundation's stated goal is to end type 1 diabetes (T1D). Focusing on research and advocacy, the JDRF invests in cure therapies, treatment therapies and preventative research. The foundation began in 1970 with its Canadian chapter opening in 1974. In those four decades the JDRF has raised $1.9 billion USD ($2.37 CDN) towards diabetes research.

According to JDRF, more than 300,000 Canadian children and adults may have T1D. An immune disease that makes the body's pancreas unable to produce insulin, people with T1D must take insulin regularly via injection or pump. Some symptoms include sudden weight loss, blurred vision, abnormal vision and dry mouth, frequent urination, extreme tiredness and constant hunger.

One of the original darlings of the MTV music video age in the 1980s, Loverboy had worldwide hits with songs like "Working for the Weekend," "Lovin’ Every Minute of It" and "The Kid Is Hot Tonite." Lead singer Mike Reno's tight red leather pants and ubiquitous bandanas became a signature look for the band and an iconic image of the flashy '80s.