Look Who Has Stepped Up to Help Flint: Snoop, Wahlberg, Fallon, Diddy, Pearl Jam and More 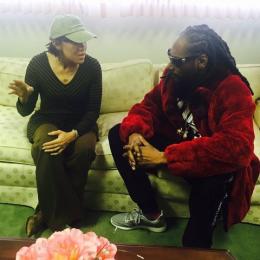 As the city of Flint, Michigan continues to grapple with their water crisis, with Mayor Karen Weaver recently launching a FastStart project to replace all the lead service lines with copper pipe, celebrities from the music, film, comedy and sports worlds are doing what they can to pitch in.

The crisis arose when citizens were forced to use the Flint River as a source of their drinking water from April 2014 until Oct. 16, 2015, resulting in elevated levels of lead in their water due to corrosive pipes. The city is advising residents not to drink water without an NSF certified water filter that specifically removes lead.

Much of the blame has been placed on the shoulders of Michigan Governor Rick Snyder, who many have openly criticized for his alleged lack of response during the early stages of this tragedy, and his alleged mishandling of the whole affair.

Here, in chronological order, are what the different celebs are contributing in order to help the 100,000 citizens affected by this crisis. 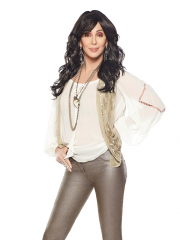 The first to step up, music and TV superstar Cher struck an agreement with California water bottler Icelandic Glacial to send 180,000 bottles of water to Flint within two weeks of the city declaring a state of emergency on Dec. 14. As Cher was finalizing the deal for the water, which began arriving at the Eastern Michigan Food Bank on Jan. 20, other celebs began launching campaigns and donations of their own.

Seattle rockers Pearl Jam teamed up with their manager Kelly Curtis to pledge $125,000 (U.S.) to the United Way of Genesee County and asked friends such as the Glaser Progress Foundation, Live Nation, Brandi Carlile’s Looking Out Foundation, Republic Records, Ticketmaster, Universal Music Publishing Group and William Morris Endeavour Entertainment to pool together an additional $175,000 (U.S.).  The band also asked their fans to support a CrowdRise campaign, with contributions so far totaling $393,101(U.S.) as of March 17.

Detroit rapper “Big Sean" Anderson, through his Sean Anderson Foundation, personally pledged $10,000 U.S. to the Flint Child Health and Development Fund and is running a crowdfunding campaign though the third week of April.

“I am devastated by the water crisis that has put the entire city of Flint in a state of emergency,” Big Sean said in a statement on his Sean Anderson Foundation website. “In recognizing the great work that the Community Foundation of Greater Flint Michigan has been doing, it is my hope that we can help by raising the money needed to ensure that the children who have been hit the hardest receive the care that they need today and well into the future.”

He’s also started a CrowdRise fund to reach the public.  Those who donate $10 or more will have a chance to win a pair of VIP tickets to one of his concerts in 2016, plus a meet and greet and photo opportunity. The Big Sean crowdfunding campaign — which also includes three entries for a $25 donation and seven entries for $50 or more — runs until April 20 and six winners will be announced before the month is through. 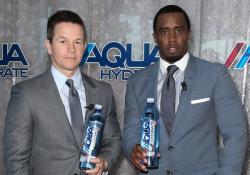 Although he’s not from Detroit, Philadelphia rapper Meek Mill has also made a $50,000 (U.S.) donation to the Flint Child and Family Health Development Fund. He’s also shipped 60,000 bottles of water to Flint Michigan’s denizens.

While Detroit native rocker Jack White hasn’t made a donation per se, he’s enlisted the patrons of his Nashville-based Third Man Records to pitch in via discounted merchandise. For a few weeks, anyone who donated to the Helping Hand for Flint Fund received an entry towards a draw for a rare Hateful Eight box set.

Now he’s offering discounts: anyone who makes a donation of water will get 20 percent off their purchase, and qualify for a five-year VIP membership access which will allow the winner to participate in live, exclusive chats with White and other special offers. So far Third Man Records CrowdRise campaign has raised $18,277 (U.S.).

And although he hasn’t donated anything as of yet, beloved hip-hop performer Calvin “Snoop Dogg” Broadus made his way to Flint, Michigan on Jan/ 30 (in town for a Detroit concert appearance at the Masonic) to meet with Flint Mayor Karen Weaver for a “fact-finding” mission for some of his celebrity friends. “#FlintLivesMatter lets get 2gether n help flint in their crisis,” he tweeted Feb. 1. 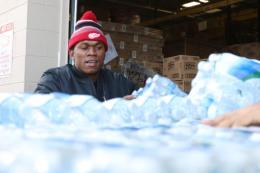 Referring to the two-digit number on the back of his sweater, NFL Detroit Lions defensive end Ezekiel “Ziggy” Ansah multiplied it by 1000 and pledged 94,000 bottles of water with some of his teammates kicking in to cover the cost.

“I come from Africa and I know exactly what it means not to have clean water,” Ansah tweeted on Jan. 23.

Lions’ safety Glover Quin followed suit with some of his defensive end teammates for an additional 36,000 bottles. The Detroit Lions also donated an undisclosed amount as an organization to the United Way to help out with relief efforts.

On Jan. 24, late night talk show host and ex-Saturday Night Live comedian Jimmy Fallon donated $10,000 and asked 10 of his celebrity friends to match his gift to the Community Foundation of Greater Flint.  Those rising to the challenge by kicking in $10,000 include Madonna, film director Judd Apatow, Two And A Half-Men’s Jon Cryer, Rosie O’Donnell and fellow TV host and SNL alumnus Seth Meyers.

The Queen of Soul is donating 50 rooms at either the Detroit Holiday Inn Express or the Comfort Inn nightly plus food vouchers to those affected by the Flint water crisis.

The latest multiple celebrity effort occurred during the night of the Oscars, where comedian Hannibal Buress hosted #JusticeForFlint and raised $156,000 towards the cause, at an event that included film directors Ryan Coogler (Creed) and Ava DuVernay (Selma), Stevie Wonder and Janelle Monae.

Not everyone is asking for donations, however. Documentary filmmaker Michael Moore, whose breakthrough documentary Roger And Me was lensed in Flint, implores people not to send bottles of water but instead join him in a “revolution.”

In an open letter entitled “10 Things They Won’t Tell You About The Flint Water Tragedy. But I Will,” Moore presents damning evidence that suggests Michigan’s Republican governor Rick Snyder knew about the contamination and specifically arranged for clean water to be supplied to General Motors factory headquarters in the city while everyone else in Flint was drinking the toxic stuff.

There are other conflicts of interest and government mismanagement that Moore outlines in his letter, concluding that many of Snyder’s actions were allegedly motivated to give more tax breaks to the wealthy.

However, Moore’s own course of action is to implore U.S. President Obama and U.S. Attorney General Loretta Lynch to “investigate, and if warranted, arrest and prosecute the Governor of Michigan, Rick Snyder, for violating the Environmental Protection Agency’s regulations in cutting off clean drinking water to the city of Flint and making the citizens, instead, drink polluted water from the Flint River; for fraud and political corruption; and for covering up the criminal actions of his administration,” through a petition on his website.

For those wishing to donate, cheques can also be mailed to: