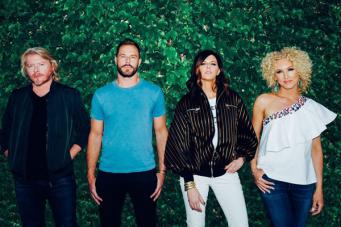 Six U.S. schools will receive music education grants and get the opportunity to take part in the fourth annual Music In Our Schools Tour thanks to the Give A Note Foundation and the Country Music Association's CMA Foundation. Country group Little Big Town will also share their experiences with some of the students at a Disney workshop.

Each school will receive a $2,500 grant from the Give A Note Foundation and an equal $2,500 from the CMA Foundation. On top of that, the schools will get to have select hosted performances courtesy of Radio Disney and Radio Disney Country. The winning schools had to submit inspiring performance videos in the fall. Twelve semifinalist schools were chosen from those videos, and the six winners were then selected via public vote.

An affiliate of the National Association for Music Education, Give A Note Foundation's stated goal is to conduct national awareness campaigns and raise funds "to support and strengthen music education programs across the U.S." The CMA Foundation, which is the charitable arm of the Country Music Association, "focuses on improving and sustaining music education programs everywhere while supporting worthwhile causes important to the CMA."

"It's an honor to be part of celebrating these talented students and see the positive impact that music education has made on their lives. We value our role in Music In Our Schools and share in Give a Note's commitment to expand music education in schools," said Phil Guerini, vice president, music strategy, Disney Channels Worldwide and general manager, Radio Disney Network, in a statement.

Added Give a Note executive director/CEO Jane Mell Balek: “Give a Note believes in the power of music to inspire and to bring everyone together. We are excited to work once again with Radio Disney, Disney Performing Arts, and the CMA Foundation to celebrate and share the amazing power of music-making and learning through the Music In Our Schools Tour. This fourth Tour will once again show the positive impact of music on students’ lives, and encourage communities to rally together to support music in all schools.”

Little Big Town, five-time CMA winners for vocal group of the year, will launch the 2017 Music In Our Schools Tour at Disney’s Saratoga Springs Resort Performance Hall at Florida's Walt Disney World, during one of the Disney performing arts workshops called Disney Sings, where students record from a Disney animated film soundtrack in order to critique their vocals. According to the release, Little Big Town — Karen Fairchild, Kimberly Schlapman, Philip Sweet, and Jimi Westbrook —  will share their own experiences with music education and the important role of music.

"We couldn’t be more proud to help kick off a program that will not only reach students around the country but also recognize the amazing music educators who impact their lives every day,"  Fairchild, who is on the board of the CMA Foundation, said in a statement. "Music clearly inspired us when we were young, and we’re honored to be advocates for young people, who each deserve access to music programs."

The 2017 tour will visit the schools of two Tri-M Music Honor Society chapters and the colleges/universities of two collegiate NAfME chapters that raised the most donations for Give a Note during the fall’s #MusicEdMatters Chapter Challenge Oct. 1-Dec. 31.

On top of the grants and performance opportunities, the CMA Foundation will also be sending the six music teachers from the winning schools to attend the annual Music Teachers of Excellence Program in Nashville.