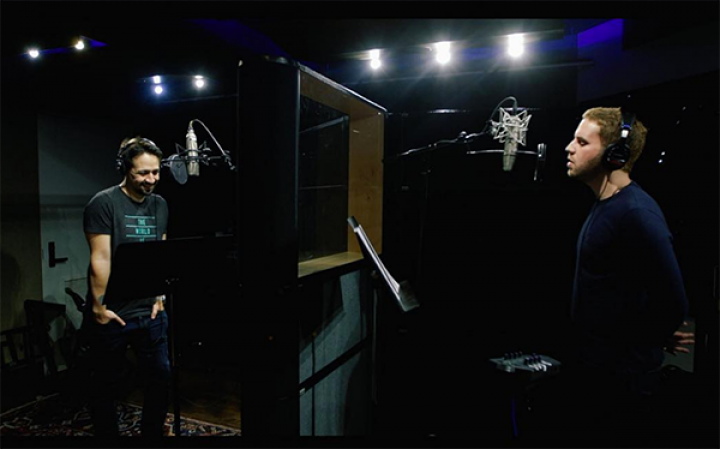 Hamilton creator Lin-Manuel Miranda and Tony Award-winning actor Ben Platt will perform their new charity song “Found/Tonight” at the March For Our Lives rally in Washington D.C. this Saturday, March 24.

The pair has been added to the lineup alongside Common, Miley Cyrus, Andra Day, Ariana Grande, Jennifer Hudson, Demi Lovato and Vic Mensa; the speakers will be teenagers from all over the States who have been affected by gun violence.

The rally will be streamed live to at noon ET on Twitter, Facebook, and YouTube,  while more than 800 other March For Our Lives demonstrations will take place around the globe.

The song — co-written by Lin-Manuel Miranda, Benj Pasek and Justin Paul, and produced, arranged, and orchestrated by Alex Lacamoire — was inspired by the end-gun-violence movement spearheaded by some student survivors from Majorie Stoneman Douglas High School where 17 people were killed Feb. 14.

“We may not yet have reached our glory,” the lyric begins. “But I will gladly join the fight And when our children tell their story.”  The video already has more than 2 million views on YouTube (Watch it below).

On instragram, Platt, who had the title role in Broadway’s Dear Evan Hansen,  and played Benji Applebaum in two Pitch Perfect movies, wrote: “Honored to team up with Lin Manuel Miranda on “Found/Tonight,” a gorgeous mashup of @hamiltonmusicaland @DearEvanHansen arranged by the great @alacamoire. Proceeds go to the incredible #MarchForOurLives Initiative, so stream & download & listen, link in bio! #GunControlNow”

A portion of all proceeds from the sale of the song will towards the March For Our Lives Initiative.

Donations to the March For Our Lives Action Fund will not only go towards all expenses associated with the Washington march, but will be used to fight for comprehensive gun safety legislation at the local, state, and federal level, and to voter education, ballot initiatives, and lobbying state legislatures and Congress to protect America’s kids.

[Verse 3: Ben Platt, Lin-Manuel Miranda]
Well, let that lonely feeling wash away
All we see is light
‘Cause maybe there’s a reason to believe you’ll be okay
For forever
‘Cause when you don’t feel strong enough to stand
You can reach, reach out your hand

[Verse 4: Ben Platt, Lin-Manuel Miranda, both]
And oh
Raise a glass to freedom
Something they can never take away
Oh
No matter what they tell you
Someone will coming running
They’ll take you home
Raise a glass to all of us
Tomorrow there’ll be more of us
Telling the story of tonight
Out of the shadows