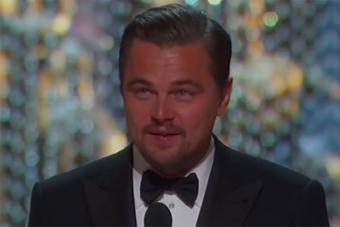 The big story from last night's 2016 Academy Awards broadcast was that 41-year-old actor Leonardo DiCaprio won the best actor Oscar for his performance in the grueling wilderness adventure, The Revenant.

DiCaprio's acceptance speech started conventionally. He thanked the Academy, everyone in the room, The Revenant's cast and crew, director Alejandro G. Iñárritu, fellow actor Tom Hardy and a number of others.

Then DiCaprio's speech took a turn. The actor used his remaining time on stage to make a dramatic statement about climate change.

"Lastly, I just want to say this: Making The Revenant was about man's relationship to the natural world. A world that we collectively felt in 2015 as the hottest year in recorded history," said DiCaprio.

"Our production needed to move to the southern tip of this planet just to be able to find snow. Climate change is real, it is happening right now. It is the most urgent threat facing our entire species, and we need to work collectively together and stop procrastinating. We need to support leaders around the world who do not speak for the big polluters or the big corporations, but who speak for all of humanity, for the indigenous people of the world, for the billions and billions of underprivileged people out there who will be most affected by this. For our children’s children, and for those people out there whose voices have been drowned out by the politics of greed.

In a Jan. 20 press release posted on NASA.gov, "Earth’s 2015 surface temperatures were the warmest since modern record keeping began in 1880, according to independent analyses by NASA and the National Oceanic and Atmospheric Administration (NOAA).

"Globally-averaged temperatures in 2015 shattered the previous mark set in 2014 by 0.23 degrees Fahrenheit (0.13 Celsius). Only once before, in 1998, has the new record been greater than the old record by this much."

DiCaprio's impassioned speech was far from the only moment of activism during the awards show.