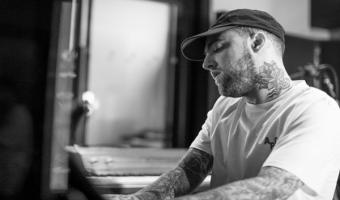 The release of late rapper Mac Miller's "Dunno" single will be used to raise funds for the Mac Miller Circles Fund to support people from underserved communities.

This version of "Dunno" is an alternate take of the song from the rapper/producer's 2018 Swimming album, which was recorded for the Spotify Singles series. A vinyl seven-inch version of "Dunno" with a b-side cover of Billy Preston's "Nothing From Nothing" is being released with proceeds going towards the Circles Fund. The blue vinyl is available exclusively via Spotify Fans First program. Both songs are now available to hear on the Spotify streaming service.

Miller's family established the Circles Fund a month after his accidental overdose death on Sept. 7, 2018 as a way to maintain a philanthropic connection to his music.

The fund, which is administered by The Pittsburgh Foundation, will "provide programming, resources and opportunities to youth from underserved communities, helping them recognize their full potential through exploration in the arts and community building."

When Miller's family announced the creation of the Circles Fund they said it was about supporting community.

"Malcolm had a passion and commitment, not only to the arts, but to creating, deepening and protecting the idea and practice of community. The Mac Miller Circles Fund will continue his vision of giving access and opportunities to kids to explore the arts and to have a positive impact on communities across the country. He cared very much about working to make the world a kinder place and we will continue to do just that."

Founded in 1945, The Pittsburgh Foundation works to support donors provide for the critical needs of communities. Some of their initiatives include Advancing Black Arts In Pittsburgh, the Investing In Professional Artists Program, the Small And Mighty Grants program to support community non-profits, and the Social Justice Fund.

Miller, who was 26 at the time of his death, released five full-length albums in his music career. All five records made the top five on the US charts, with his debut Blue Slide Park hitting number one.