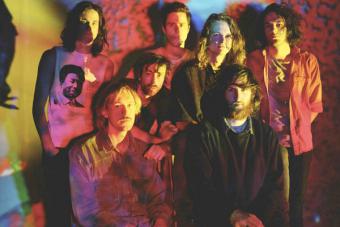 Nearly 6,000 firefighters, army reservists and specialists have been deployed to combat nearly 140 separate bushfires around the country. These ongoing fires have been responsible for at least 30 deaths, burned 18.6 million hectares of land and caused the destruction of an estimated 2,683 homes. Additionally, experts are now estimating more than a billion animals on the island continent have died as a result of the fires.

The three albums were all recorded in 2019 and feature distinct setlists. Each album is for sale digitally for $10 AUD ($8.96 CAD) or more with donation.

Live In Paris '19 is a 19-track set from the band's show at L'Olympia, Paris, France, on Oct. 14, 2019. Released on Jan. 10, proceeds from this album will go towards Wildlife Victoria. Wildlife Victoria's mission is to "help and protect wildlife through our rescue, education, and advocacy activities." Donations to this organization will go towards supporting ongoing and rebuilding efforts for animal shelters.

Also released on Jan. 10, Live In Adelaide '19 is 18 songs in length and is taken from the band's show at Thebarton Theatre in Adelaide, Australia on July 12, 2019. Proceeds from this album will go towards Animals Australia. An animal protection organization, Animals Australia operate a number of campaigns that address things like extreme animal cruelty, animal testing, wildlife and environmental issues.

The third album in the series is Live In Brussels '19, a 17-song set recorded at Ancienne Belgique in Brussels, Belgium on October 8-9, 2019. Released on Jan. 15, proceeds from this recording will go towards Wires Wildlife Rescue. Australia's largest wildlife rescue organization, Wires currently operates programs such directing trained licensed wildlife rescue and rehabilitation providers and qualified vets to provide assistance in fire affected areas.

When the band released the Brussels album they posted on their Instagram that they had already raised $25,000 AUD ($22,410 CAD) each for Animals Australia and Wildlife Victoria.

"3RD live album LIVE IN BRUSSELS 19’ available to download on band camp now," read the post. "All proceeds will go to @wireswildliferescue for bushfire relief ❤️ Thank you so much to everyone for buying so far we have already donated 25k each to @animalsaustralia and @wildlifevictoria and will keep donating as sales come in xx"

There are a number of ways people can support firefighting efforts in Australia if sampling King Gizzard's excellent, wide-ranging sci-fi rock isn't their thing. The Red Cross, firefighter, Indigenous, animal support and environmental organizations in the country are all accepting donations.

King Gizzard are far from the only musicians to mobilize to support those affected by these massive fires. At least two massive relief support concerts are being planned in Australia. Additionally, A-list acts like Elton John, Pink, Metallica, Keith Urban and Nick Cave have all made significant donations to fire relief causes.