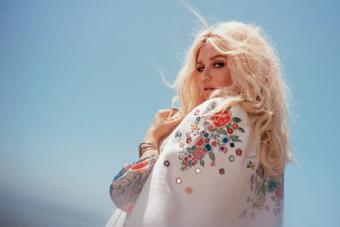 Pop music superstar/songwriter Kesha’s new single "Here Comes The Change" is an anthem of empowerment and the positive influence that a solitary individual can have for good in society.

Kesha penned an essay for the Refinery 29 website where she outlined the meaning behind "Here Comes The Change," arguing that the only way to improve the things that frustrate and anger us about the world is for people to participate, to make their voices heard, especially at the ballot box.

"In order to create the lasting change we want, we have to stay involved and above all, we have to vote," she said in the essay, which was inspired by the film On The Basis of Sex, which in itself was inspired by the early activism of Ruth Bader Ginsburg, who is marking 25 years on the U.S. Supreme Court. The film follows Ginsburg as a young lawyer teaming with her husband Marty to bring a ground-breaking case before the U.S. Court of Appeals and overturn a century of gender discrimination.

Kesha took that message of empowerment and the impact that one person can have on society and the political system to heart when composing "Here Comes The Change," as she explained in her Refinery 29 essay.

"It was amazing to see Ginsburg’s story of leading a campaign that successfully changes laws that discriminated against Americans purely on the basis of their sex, as the film title suggests. In watching the film, I was struck by how much Ginsburg was able to accomplish in her life, and at the same time, how much more there is to do in the fight for equality for all people," she wrote.

"It reminded me of – and strengthened – my belief that any single person can make lasting change, starting with one small action. I wanted to do what I could to pay tribute to Ginsburg, who has spent a lifetime fighting tirelessly for equality, with no signs of slowing down. I wanted to make my voice heard, too."

Also drawing inspiration from the song and the film was internationally respected artist and social activist Shepard Fairey, who created the single art for "Here Comes The Change."

Furthering the goal of empowering individuals and encouraging those of voting age in the United States to do so in the forthcoming mid-term elections being held in November, a lyric video was created for the song in partnership with HeadCount, a music-based non-profit organization that encourages and helps facilitate voter registration in the United States.

According to the HeadCount website, the objectives of the organization are to inspire participation in democracy through the power of music, provide artists and fans with the tools to be active in democracy, harness the music community’s potential to make a positive contribution to society and mobilize the music community into a force capable of influencing policy and culture.

"HeadCount is a non-partisan organization that uses the power of music to register voters and promote participation in democracy. We reach young people and music fans where they already are – at concerts and online – to inform and empower. Our message is not about what party you support or where you land on an issue. It’s that you must speak to be heard," said the group’s mission statement.

The likes of Wilco, Phish, JAY-Z, The Dave Matthews Band and the Dixie Chicks are participants in HeadCount’s voter registration programs.