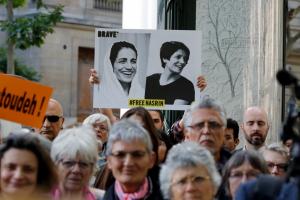 June 13 marked the third anniversary of the arrest and imprisonment of Iranian human rights attorney Nasrin Sotoudeh, and a social media campaign — #StandUp4NASRIN
and #FreeNasrin — has been launched to pay tribute to her and call for the release political prisoners around the world.

Sotoudeh, who has been referred to as the Nelson Mandela of Iran, was sentenced to decades in prison for defending the rights of women, children, religious minorities, journalists, artists and those facing the death penalty in the country. The mother of two children, who was also imprisoned from 2010 to 2013, has survived COVID-19, grave heart ailments, a hunger strike and horrible prison conditions.

Sotoudeh was the subject of an award-winning 2020 documentary titled Nasrin that was secretly filmed in Iran by men and women who risked arrest for their involvement. Director Jeff Kaufman and producer Marcia S. Ross have launched the social media campaign in cooperation with a variety of artists, activists and human rights organizations.

Several people have recorded video messages that will premiere every Monday and Thursday on Nasrin’s YouTube channel. A video from Kerry Kennedy, president of Robert F. Kennedy Human Rights — an American non-profit human rights advocacy organization named after United States Senator Robert F. Kennedy following his 1968 assassination — is the first in the series.