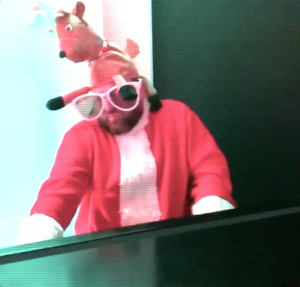 Six-time Juno Award winner Johnny Reid, who last month released My Kind Of Christmas Deluxe Edition, including a rollicking take-that-2020 song “A Time For Having Fun,” is hosting A Time For Having Fun Virtual Christmas Variety Show, streamed on his web site Dec. 12 at 8 p.m. (EST). Proceeds from ticket sales support March of Dimes Canada which provides a range of services for people living with disabilities.

To purchase the $15 tickets, one must login in or sign up for his Tartan Army Fan Club (free).

Complimentary tickets have been distributed by March of Dimes Canada to individuals nationwide who receive their assistance.

While a lot of artists are picking music-related charities to support via their music and online concerts, Reid says he chose March of Dimes Canada because of his fans.

“Since I first started, my goal has always been to take care of my audience,” Reid tells Samaritanmag. “Every time we have a show, we have these meet and greets with one hundred, two hundred, sometimes three hundred people. It always blows me away how many people are out there that take care of other people, whether it be wheeling out a wheelchair up to the meet and greet or helping their mom and dad at the meet and greet or helping their kids get through some tough things.”

The Scotsman, who moved to Canada with his parents when he was 13, launching his music career in the mid-90s, adds that “there’s a couple of people that have supported me since I very first started, like young girl, she’s a woman now, by the name of Sherry [Spofford], who has disabilities."

Based in Nashville, the singer-songwriter has already recorded his next album while in quarantine and wrapped up an album he's producing by reggae artist Gramps Morgan. He admits it has been weird to be home, not performing for his fans, but he's "trying to get through it and maintain a positive attitude." It's others he worries about.

“This a tough time of year for people, period, but especially for people with disabilities and depend on other people. As you can imagine, the isolation leads to sadness leads to loneliness which leads to depression which leads to all these other kinds of other stuff," he says.

To make matters worse, he explains that charities like March of Dimes Canada can't hold fundraising events because of the social distancing measures and health guidelines due to the pandemic, which means donations are down.

“March of Dimes Canada it’s a big organization that makes sure that people with disabilities are taken care of and they’ve got a wee bit of company," says Reid. "I felt it was really important and a good cause to bring on board for this special.”

A Time For Having Fun Virtual Christmas Variety Show will include performance of a few songs from My Kind Of Christmas Deluxe Edition, giveaways, special guests, Christmas traditions, and more. The EP includes originals like “A Time For Having Fun” and “All I Want For Christmas” and classics like “Let It Snow” and “Jingle Bells.”

Over a career spanning more than two decades, Reid has sold more than 1.5 million units, and won 26 Canadian Country Music Awards, six Junos and sold out multiple national arena tours. He released his first seasonal album, Christmas, in 2009, followed by A Christmas Gift To You, in 2013, and last year's My Kind Of Christmas.