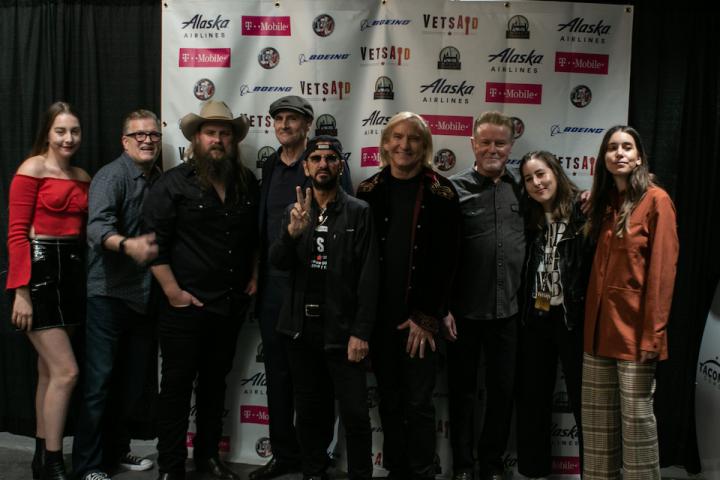 Joe Walsh has revealed $795,000 USD ($1.065 million CAD) made from the Eagles/James Gang rocker's VetsAid concert last fall will be distributed to American war veteran support organizations across the country in large and small grants.

A total of $1.2M was raised from Walsh's second annual VetsAid concert in Tacoma, Washington held on Veteran's Day, Nov. 11, 2018 (the remainder will be given out throughout the year). The massive show featured performances by Walsh, Don Henley, James Taylor, Chris Stapleton, Haim and Ringo Starr. The third annual VetsAid concert will take place on Nov. 10, 2019 in Houston, Texas.

VetsAid, modelled on Willie Nelson's Farm Aid, aims to strengthen organizations that support war veterans who are at risk of being left unemployed and homeless after serving in combat. The non-profit helps veterans and their families as they resume civilian lives after returning home from recent conflicts in Iraq and Afghanistan, or struggling Vietnam veterans battling alcoholism or opioid addictions.

Walsh has always been a strong advocate for veterans.

"VetsAid – the shows, the old friends coming together to make music, the new friends I’ve made along the way and the veterans community that has so warmly welcomed me — is quickly becoming one of the great joys and privileges of my life. I’m so grateful for the support we’ve received and I’m proud to be able to do what I can and for a population that does so much and asks for so little," said Walsh in a statement.

Walsh's father died while on active duty on Okinawa, Japan while in the U.S. Armed Air Forces when the future rocker was just 20 months old.

“War is hell for everyone involved. I lost my father when I was a baby, before I could even make a memory of him," Walsh explained on the VetsAid website.

The organizations receiving $75,000 each include Operation Mend, a partnership of UCLA Health, the U.S. military and the Department of Veterans Affairs to help care for wounded veterans with advanced surgery; and Hire Heroes USA, which supports U.S. military members, veterans and military spouses as they enter the workforce as civilians by offering career services.

Other recipients of large grants include Warrior Canine Connection, which gets recovering veterans to train service dogs for fellow veterans also reconnecting with civilian life and their families and communities; Tragedy Assistance Programs for Survivors, which supports family and friendsgrieving the death of military veteran, including those that took their own lives; and the Semper Fi Fund, which offers immediate and lifetime financial assistance to veterans wounded or left critically ill in the line of duty.

Walsh and the board of VetsAid, aided by the National Association of Veteran-Serving Organizations, also gave $75,000 each to the Children of Fallen Patriots Foundation, which offers college scholarships and educational counselling to children who have lost a parent in combat; Stop Soldier Suicide, a non-profit aiding veterans with PTSD or mental health issues and at risk of suicide; Midwest Shelter for Homeless Veterans, a provider of housing and support services; and Sentinels of Freedom, which helps wounded veterans complete higher education.

Additionally, Walsh also gave a $10,000 grant to the Veterans Fund of the Ventura County Community Fund in Ventura, California, where he once lived, to support those attempting to rebuild their lives after the recent Hill and Woolsey Fires.

Walsh intends to bring VetsAid to other parts of America.

"It was always my intention to make this a travelling circus and bring the love to as many corners of this great country as possible," Walsh added.