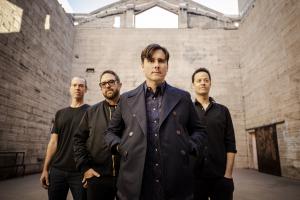 Alternative rock band Jimmy Eat World will present a series of three live stream concerts beginning on Jan. 15, and one dollar for every ticket sold until Jan. 14 will be donated to the National Independent Venue Association (NIVA) Emergency Relief Fund.

Jimmy Eat World will perform all of the songs from its 10th and most recent album, Surviving, on Jan. 15. The Mesa, Ariz. quartet, which formed in 1993, will go back further in its history by performing all of 2004’s Futures on Jan. 29 and 1999’s Clarity on Feb. 12. Tickets can be purchased and the performances can be watched on JimmyEatWorldLive.com.

“We are always looking for ways to challenge ourselves, to do things as music fans that we think would be cool for OUR fans,” Jimmy Eat World lead singer and guitarist Jim Adkins said in a media release.

“We came up with the idea of presenting a series of concert films centered around a few specific albums (for now) and performing them on a different level. It isn’t the way we normally play a show and it’s definitely something new for how we approach a performance, but we haven’t been able to share the experience with our fans in over a year... so here we go!”

Each show will be recorded at the Icehouse in Phoenix, start at 2 p.m. PST (5 p.m. EST), and be available on demand for 72 hours post-stream on the Jimmy Eat World Live website. The “Phoenix Sessions” shows will all be staged in conjunction with Danny Wimmer Presents, which has been producing concerts and festivals since 1993.

NIVA is a New York City-based organization of independent music venues, promoters and festivals that was formed last March. It pursues federal support, such as business recovery grants and tax relief, in the wake of COVID-19’s devastating effect on the live entertainment industry.

NIVA manages the SaveOurStages.com website and was instrumental in getting the Save Our Stages Act passed by the United States Congress as part of a COVID-19 relief bill.

NIVA hopes to work with U.S. Small Business Administration, a government agency that provides support to entrepreneurs and small businesses, to ensure emergency relief funds are dispersed as Congress intended and that the process is implemented accurately, fairly and as expediently as possible.

The NIVA Emergency Relief Fund was launched in October to raise money for the most vulnerable venues and keep them afloat while pursuing Congress for federal financial relief.

Donations can be made on the NIVA Emergency Relief Fund web page. The fund is administered by The Giving Back Fund, a non-profit organization that collects the money and oversees the application process to enable venues to receive grants.

The Giving Back Fund encourages and facilitates charitable giving by professional athletes, celebrities, high net worth individuals, existing non-profit organizations, corporations and others. It provides philanthropic consulting, management and administrative services while operating as a vehicle for establishing individual foundations and fiscally sponsored projects under a governance structure like that of a community foundation.