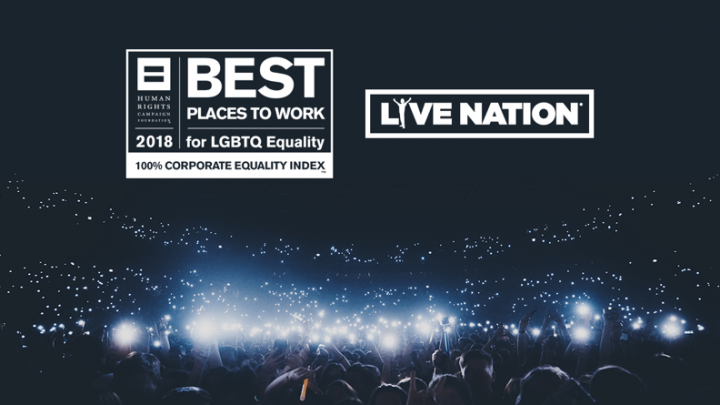 The Human Rights Campaign Foundation has named concert promotion agency Live Nation Entertainment one of the best places to work for LGBTQ employees and their allies. The corporation scored 100 percent on HRC’s 2018 Corporate Equality Index with regards to its company policies and practices related to lesbian, gay, bisexual, transgender and queer workplace equality.

“Live music brings together fans of all different backgrounds while also encouraging self-expression, and at Live Nation we do everything we can to promote that same culture of inclusion for our employees,” said Live Nation Entertainment president and CEO Michael Rapino, in a statement. “As the world’s leader in live entertainment, we are proud to empower the LGBTQ community through concerts and career opportunities, and are honored to be recognized by the Human Rights Campaign.”

Live Nation’s perfect score aligns them with 609 other U.S. businesses, offering such programs to its employees as Transgender Benefits & Wellness, full benefits for domestic partnerships, inclusive culture and engagement which also includes access to LGBTQ Employee Resource Groups, equal opportunity employment and others.

Live Nation has also been given the thumbs-up for its commitment to diversity and inclusion by the Great Place to Work organization (where 83 percent of the company’s 1114 polled employees say Live Nation is a great place to work) and the veteran empowerment organizations Got Your 6 and Vet Tix, the latter providing over 3 million event tickets to currently serving military, veterans, military families and families of those killed in action.

In third-quarter results announced Nov. 2, Live Nation Entertainment reported shows over 80 million concert tickets sold for 2017 shows, a 20 percent increase through October and a 12 percent increase in revenue to $3.6B (U.S.)