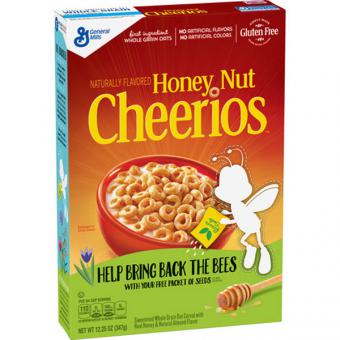 A new Honey Nut Cheerios campaign called Bring Back The Bees has begun rolling out to protect bees, and by extension, protect our food supplies.

According to Greenpeace, Honey bees perform about 80 percent of all pollination worldwide. Grains are primarily pollinated by the wind, but fruits, nuts and vegetables are pollinated by bees.

In the U.S. — among crops that require bee pollination — the number of bee colonies per hectare has declined by 90 percent since 1962. "Scientists know that bees are dying from a variety of factors—pesticides, drought, habitat destruction, nutrition deficit, air pollution, global warming and more."

The breakfast cereal, which uses "iconic spokesbee" BuzzBee to promote its product, is the focal point of a plan to distribute free seeds in the hopes of getting over 100 million wildflowers planted.

The wildflowers would provide valuable habit for bees. Approximately 90 percent of the world's nutrition (70 of the top 100 human food crops, according to Greenpeace) are pollinated by bees. Those same bees have been experiencing poor colony health as well as an estimated loss of approximately nine million acres of habitat since 2008 as grasslands get converted to crop lands. The General Mills seed giveaway offsets that habitat loss in a small way.

"As a General Mills cereal built around nutrition, helping pollinators get the key nutrition they need through fun, family-friendly activities like planting wildflowers is a natural fit," said Susanne Prucha, director of marketing for Cheerios, in a press release. "Our commitment to increasing the habitat for pollinators is one way we are continuously striving to be a company that not only makes products people love, but a company that pursues creative solutions to make our world a better place for all families."

To get the free Veseys Seeds interested bee protectors need to go to the Bring Back The Bees website and fill out the request form.

The wildflower seeds being included in the giveaway are:

General Mills has a vested interest in protecting bees. The company estimates that 30 per cent of all ingredients in its products rely on pollination. Besides the seeds giveaway, the company has committed to ensuring that 3,300 acres of pollinator habitat be incorporated into the 60,000 acres of land used to grow the oats for their Cheerios products.

Additionally, General Mills has given more than $4 million USD ($5,345,400 CDN) since 2011 to the Xerces Society, a science-based conservation organization that works with scientists, land managers, educators, policymakers, farmers and citizens to protect bees and other invertebrates.

Watch the Honey Nut Cheerios Bring Back The Bees video