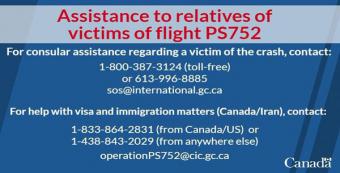 The Canadian government is actively seeking to support the families related to the #PS752 plane crash.

On Jan. 8 Ukraine International Airlines Flight 752 (#PS752) was shot down shortly after takeoff from the Tehran Imam Khomeini International Airport by the Islamic Revolutionary Guard Corps of Iran. All 176 passengers on the flight were killed, including 63 Canadians.

Canada’s Minister of Foreign Affairs François-Philippe Champagne tweeted out on Jan. 11 that those connected to the crash should contact them for assistance. Champagne wrote:

Families of victims of #PS752 requiring consular assistance or help with visas and immigration should contact the Government of Canada using these coordinates:

For help with visa and immigration matters (Canada/Iran), contact:

Champagne has also followed that up with a number of tweets in English and French addressing security concerns, outlining the cities where they've sent consulate agents to help families, and updating Canadians on the progress of its crash investigators.

Canadian Prime Minister Justin Trudeau said the families affected by the crash "deserve answers." Trudeau's firm yet diplomatic language towards Iran in the aftermath of the crash has been credited in some quarters as the reason why the Islamic Revolutionary Guard Corps admitted to shooting down the plane in what Iranian President Hassan Rouhani called an "unforgivable mistake." Iranian officials have said the Revolutionary Guard mistook #PS752 for a U.S. cruise missile.

Trudeau made a speech in Ottawa on Jan. 11 calling for Iran to take full responsibility for its actions.

"Canada and the world still have many questions, questions that must be answered... we need full clarity on how such a horrific tragedy could have occurred," said Trudeau. "Families are seeking justice and accountability and they deserve closure."

"I had a chance to sit with some of the families of the victims. They are hurt, angry and grieving. They want answers, they want justice. What Iran has admitted to is very serious. Shooting down a civilian aircraft is horrific. Iran must take full responsibility," added Trudeau. "Canada will not rest until we get justice, accountability and closure that the families deserve."

Tensions in and around Iran have been extremely high in recent weeks, in part related to the U.S. military's drone strike attack on Baghdad International Airport Jan. 3 that killed Iranian major general Qasem Soleimani of the Islamic Revolutionary Guard.