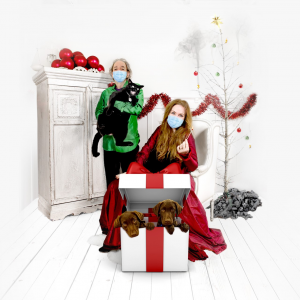 Famed Simpsons and This Is Spinal Tap actor, writer, musician Harry Shearer and wife singer-songwriter Judith Owen are presenting their A Very Virtual Christmas Without Tears variety show online for its 15th edition, with proceeds supporting U.S. and UK music communities devastated by the COVID-19 crisis. The webcast on Nugs.net will take place Dec. 11 from 2 p.m. PT (5p.m.EST).

While past shows are a house party with announced guests and drop-ins, this year more than two dozens guests — including musicians, actors, comedians, and magicians — are set to appear via video, such as Richard Thompson, Jon Cleary, Julia Fordham, Steve Lukather (featuring Ringo Starr), Jeff Goldblum, paranormal Clinton Baptiste, Paul Shaffer, Donald Fagen, John Goodman, Chris Difford, and Catherine O’Hara. The house band is CJ Vanston. There will also be a tribute to actor and This Is Spinal Tap castmate Fred Willard, who died May 15.

Tickets are $9.99 (USD) and allow access to the webcast multiple times from the time of activation until Sunday, at midnight PT (3 a.m. EST).

This year's event will direct the charity proceeds to American and British music communities hit hard by the cancellation of live shows and the shuttering of concert halls and other venues. There is also a GoFundMe page.

One of the beneficiaries is the National Independent Venue Association, representing U.S. concert halls and stages shut down early during the pandemic and not likely to reopen with significant audiences anytime soon.

"These entertainment hubs are critical to their local economies and tax bases as employers, tourism destinations, and revenue generators for neighboring businesses such as restaurants, hotels, and retail. Independent venues exist in every state across the country. They were the first to be closed, they will be the last to open. The economic recovery process will extend past just reopening the front doors, requiring solutions unique to the industry," the NIVA says on its website.

Another beneficiary is the UK-based Music Venue Trust, representing indie music halls and stages by which artists often first connect with audiences.

A Grassroots Music Venue Crisis Fund has been created to ensure local venues survive pandemic closures.  "In the next 3 months alone, MVT needs the resources and financial backing to prevent over 550 potential closures. MVT’s Emergency Response Service will defend each individual venue that comes under threat of permanent closure as and when it happens, taking actions required to prevent that venue from being permanently lost. MVT’s Emergency Response Service has a proven track record in preventing venue closures and has been successful in 98% of threatened closure cases," the Music Venue Trust says on its website.

What Shearer and Owen have billed as a humble house party became a charity event in 2005 and over the years has supported a range of causes, including Elton John's Aids Foundation and the people of New Orleans after the Katrina hurricane and flooding.

“The show started as a party in our home to try to comfort Judith, a Welsh woman prone to melancholia, who could not stand that the fact that Christmas in Southern California was about 78 degrees and sunny,” Shearer jokes in a statement.

Away from the concert stage, Shearer and Owens will also support the New Orleans Musicians' Clinic and Assistance Foundation, which offers affordable medical care to musicians, performing artists and cultural workers in the U.S.

"Our mission is to keep New Orleans music alive by supporting members of New Orleans’ traditional music cultures.  We do this by providing cost-efficient access to comprehensive and preventive health care, wellness education, mental health services and social services," the New Orleans-based medical clinic writes on its website.

And back across the Atlantic, the virtual Christmas concert will direct proceeds to Help Musicians, a UK charity for professional musicians in crisis, whether while starting out or in retirement.

An immediate focus for Help Musicians amid the pandemic is supporting musicians that don't qualify for government support or are struggling financially when out of work.

"In this incredibly difficult year, we have been doing all we can to support the thousands of musicians who are falling through the gaps in government support and are really struggling to survive," Help Musicians says on its website.