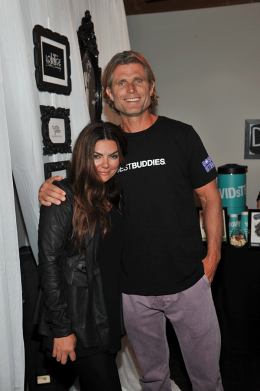 It’s happy anniversary to both philanthropic PR ace Natasha Koifman and her firm NKPR and The Toronto International Film Festival (TIFF), celebrating 10 years and 40 years, respectively. This year, for most of TIFF (10th-20th), Koifman’s annual IT Lounge has moved into the TIFF Bell Lightbox.  What does free stuff have to do with charity? Well Koifman, who works with brands on their corporate social responsibility and is herself a board member of Paul Haggis’ Artists For Peace and Justice (APJ) for Haiti, always has several charity tie-ins.

At the 2015 IT Lounge, companies such as Cross Pens, Sequence, Saje Natural Wellness, Goody hair tools, Tom Tailor, will be showcasing their wares; and actors and directors can pop in to relax and refuel (on Barilla Pasta) during the festival.

While there, photographer Caitlin Cronenberg and W magazine will capture actors and other well-known entertainers in a special designed portrait studio and Koifman (on behalf of NKPR) will make a donation to Artists for Peace and Justice on behalf of each person. In the past two years, Cronenberg has shot Julianne Moore, Eddy Redmayne, J.K. Simmons, Elizabeth Banks, Robert Pattinson, John Cusack, Felicity Jones  and more for the annual project.

Of note, Cross Pens will have notable guests signs their “Make Your Mark” guest bookwhich will be auctioned off at a later date with all proceeds returning to TIFF Ignite which supports filmmakers initiatives.

Also, Sequence, founded by Ariela Suster, a former fashion and accessories editor for InStyle, Lucky and Harper’s Bazaar, will have fashion items handcrafted in her native El Salvador by at-risk youth turned local artisans. Her goal is “to positively impact their lives and disrupt the ‘sequence’ of events that limit or lead them into violence.” She will be showcasing the #NoViolence collection ahead of October‘s National Domestic Violence Awareness Month.

Koifman, who in 2013 sold her own high-end ring-to-wrist charity bracelet, is also using the It Lounge to launch new philanthropic fragrance, TWENTYSIX, which she created in partnership with Aromacology.  Sales of the scent will benefit Artists for Peace and Justice and its mission to “support communities in Haiti and remove barriers that poverty creates for Haitian children.”

Outside of the It Lounge to coincide with TIFF, NKPR is involved yearly with Best Buddies fundraising gala event (Sept. 8), an intimate cocktail reception for 125 guests held at the private residence of Best Buddies co-founder Daniel J. Greenglass and co-hosted by Rene Pantalone. For more than 20 years, Best Buddies has raised funds and awareness for the national non-profit organization that helps provide meaningful friendships for people with intellectual disabilities.

And the marquee event during the film festival, the Artists for Peace and Justice Festival Gala, is presented by Bovet 1822 on Sept. 13. Co-chaired by Koifman and philanthropist Sylvia Mantella, it will be held at the historic Casa Loma castle and will honour advisory board member Susan Saradon for her work with APJ in Haiti. This year’s co-hosts include Hollywood legends Jane Fonda and Dame Helen Mirren, together with Haggis, Pascal Raffy, George Stroumboulopoulos and more. Moby will perform.