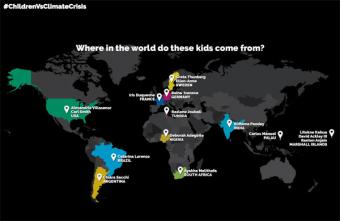 High-profile teenage climate crisis activist Greta Thunberg and 15 young colleagues from around the world have launched a lawsuit against five countries to force action on the environment.

The lawsuit, which was launched shortly after Thunberg addressed the United Nations' Climate Action Summit in New York on Sept. 23, asserts that the governments of Argentina, Brazil, France, Germany, and Turkey are violating children’s rights under the U.N. Convention on the Rights of the Child. Drafted in 1989, that treaty states that children should have the right to life, health, and peace and that these governments, by their ineffective action against the ongoing climate crisis, are in violation of the treaty. The five nations named in the lawsuit were among 51 nations which had signed a third Optional Protocol of the convention which allows children from any nation to sue them. The United States and China, the two biggest creators of carbon dioxide pollution, have not signed on to this protocol of the Convention on the Rights of the Child.

"Each respondent has failed to uphold its obligations under the Convention to (i) prevent foreseeable domestic and extraterritorial human rights violations resulting from climate change; (ii) cooperate internationally in the face of the global climate emergency; (ii i) apply the precautionary principle to protect life in the face of uncertainty, and (iv) ensure intergenerational justice for children and posterity."

The lawsuit will now be considered by an 18-person Committee on the Rights of the Child. The young activist aren't asking for any money from the suit, instead they want the committee to:

Thunberg used the start of the Climate Action Summit for a pointed public speech.

"We’ll be watching you,” said the Swedish teenager who's largely credited with starting the youth climate strike movement at the Climate Action Summit. "This is all wrong. I shouldn’t be up here. I should be back in school, on the other side of the ocean. You have stolen my dreams, my childhood with your empty words. We will not let you get away with this. Right here, right now is where we draw the line."

The 16 petitioners in the lawsuit, many of whom have ties to the Heirs To Our Oceans environmental non-profit organization, were chosen because they've all been specifically impacted by the ongoing climate crisis. Information about their goals as well as a full transcript of their lawsuit can be found at the #ChildrenVsClimateCrisis website.

The lawsuit's petitioners include:

Catarina Lorenzo, 12, twelve-year-old from Salvador, Brazil, an aspiring professional surfer who spends a lot of time on Brazil’s beaches and wants to protect that country's trees and forests.

Raina Ivanova, 15, from Hamburg, Germany, an ongoing participant in the Fridays for the Future school strike movement.

David Ackley III, "David," 16, from Majuro, Marshall Islands, participated in the Heirs To Our Oceans the environmental group.

Ranton Anjain, 17, Ebeye Island, Marshall Islands, who also participated in the Heirs To Our Oceans programs.

Litokne Kabua, 16, Ebeye Island, Marshall Islands who studied coral health on his island as part of a summer camp through Heirs To Our Oceans.

Deborah (“Debby”) Morayo Adegbile, 12, Lagos, (Nigeria) joined Heirs To Our Oceans to learn more about the changing climate and advocate against plastic pollution.

Carlos Manuel, 17, originally from the Philippines, now living on Koror, Palau, he started a Heirs To Our Ocean chapter at his school.

Ayakha Melithafa, 17, Eerste River, South Africa, took part part in the Project 90 by 2030 YouLead initiative and acts as a recruitment official for the African Climate Alliance.

Ellen-Anne, 8, from Kareusando, Sweden, wants to be a reindeer herder when she grows older.

Alexandria Villaseñor, 14, from Davis, California, began school striking for the climate outside the United Nations on December 14, 2018.

Carl Smith, 17, from Akiak, Alaska, a member of the Indigenous Yupiaq tribe. Temperature rise is changing Akiak and Carl fears that the Yupiaq way of life will disappear.