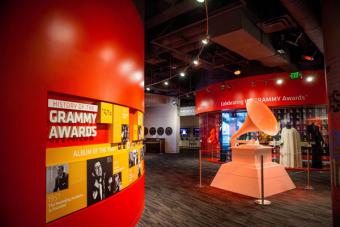 The Grammy Museum is giving $200,000 USD ($262,450 CAD) to 15 different organizations to do scientific music-related research and preserve important musical archives.

The money is coming from the Grammy Museum Grant Program, which has been established to support various music-related scientific research projects in addition to a number of archiving and preservation programs. Recipient organizations received between $5,000 - $20,000 ($6,540 - $26,140 CAD).

The Grammy Museum was established in 2008 to "cultivating a greater understanding of the history and significance of music." Maintaining a physical locations in Los Angeles and Cleveland, Mississippi, the museum also hosts traveling exhibits and develops music-based educational programs and exhibits in addition to supporting historical music projects.

"The GRAMMY Museum Grant Program to date has awarded more than $7.5 million to more than 400 grantees," said Michael Sticka, executive director of the Grammy Museum, in a press release. "The work we help fund includes an impressive array of projects that are at the forefront of exploring music's beneficial intersection with science, and that maintain our musical legacy for future generations. The initiatives announced today exemplify the Museum's mission to uphold music's value in our lives and shared culture."

Here are the grant program recipients:

* Royal Institution for the Advancement of Learning—McGill University in Montreal, QC. They're researching the memory difference between people with musical training versus those without.

* Northeastern University in Boston, MA. The university will research musical anhedonia, a scenario where people feel no reward response from listening to music.

* The Kitchen Sisters Productions in San Francisco, CA. This grant will be used to inventory, archive and make public recordings from this NPR institution.

* Percussive Arts Society in Indianapolis, IN. To inventory and assess approximately 150 hours of music on 78s from the Edwin Gerhardt Marimba Xylophone Collection.

* The House Foundation for the Arts, Inc in New York, NY. The House will publish an online database cataloging 50-plus years of previously unavailable photographs, video, audio, and objects from Meredith Monk.

* Boston Symphony Orchestra in Boston, MA. To transfer and preserve endangered audio from 282 DATs that correspond to 273 Boston Pops concerts held at Symphony Hall from 1992–2002.

To preserve, restore, digitize, and distribute 1,100 recordings from 1986-2002 that took place in Roulette's loft venue in New York City.

* The City College of New York Libraries in New York, NY. To digitize and preserve more than 221 rare interview recordings—conducted mainly between 1970 and 1974—with African-American actors, performers, composers, musicians and scholars.