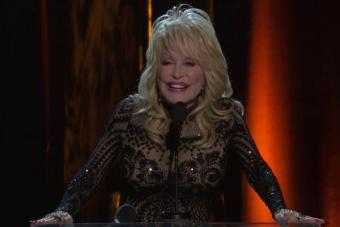 Country artist Kasey Musgraves was the big winner at last night's 61st Grammy Awards with four separate wins, but with all the charitable endeavors that took place over the Grammy weekend there will be a lot of other winners who'll benefit from the star-studded event as well.

In a prelude to the actual Grammy Awards, the MusiCares Person Of The Year honoured Dolly Parton at the Los Angeles Convention Center on Feb. 9, raising $ 6.7 million USD ($8.9 million CAD) for the MusiCares charity.

MusiCares is the music industry charity started by the Recording Academy, the same people behind the Grammy Awards. The charity acts as a safety net for musicians and music-related workers in times of need, offering preventative, recovery and emergency programs to address financial, medical and personal health issues.

The star-studded Parton event was hosted by Little Big Town and featured A-list musicians performing her songs, including P!nk doing “Jolene,” Willie Nelson & Brandi Carlile doing “Everything is Beautiful (In Its Own Way),” and Miley Cyrus, Shawn Mendes & Mark Ronson doing “Islands in the Stream."

Parton is being recognized for more than 30 years of work through her Dollywood Foundation, which is highlighted by the Imagination Library program, an organization that has provided more than 100 million books to children from birth to age five throughout the U.S.A., Canada, Australia and the U.K. since 1996. More recently, Parton created the My People Fund which raised $13 million USD ($17.11 million CAD) to help people who lost homes, property and loved ones in the Great Smoky Mountain wildfires that year.

"People say to me, 'Well, wasn’t it a man’s world when you got into the business?' And I say, it sure was and, buddy, I had a ball. I have actually worked with so many wonderful men. I’ve never met a man that I didn’t like and I’ve never met a man whose ass I couldn’t kick if he didn’t treat me with the right respect," she said.

The Grammys being a man's world was another topic of discussion throughout the award weekend. On last night's broadcast, outgoing Recording Academy president Neil Portnow highlighted the efforts being made to make the Grammys more inclusive for women and diverse populations. This, one year after he controversially stated that "women need to step up" to get Grammy consideration. (Besides Musgraves, other high-profile female Grammy winners this year included Cardi B, Lady Gaga, Dua Lipa and Ariana Grande).

"The artists who performed on the Grammy stage, who both by faith and intention represent a remarkable and diverse group, including some of the most thrilling, new and legendary female voices of all times," said Portnow in a speech during the awards broadcast that honoured his 17 years wih the Academy.  "And to me that only feels right because this past year I've been reminded that if coming face to face with an issue opens your eyes wide enough, it makes you more committed than ever to help address those issues.The need for social change has been a hallmark of the American experience from the founding of our country through the complex times we live in today. And so we must seize this unique moment to bring change within our own industry to ensure that there is diversity and inclusion in all that we do. And we will."

Women are well-represented on one important Grammy initiative, the official 2019 Grammy Nominees Album. The annually released compilation album will feature 22 tracks from the likes of Musgraves, Grande, Taylor Swift, Cardi B,  Brandi Carlile, Lady Gaga and Kelly Clarkson and will direct some proceeds to Musicares and the Grammy Museum, a Recording Academy-funded museum that celebrates the musical legacies of all musical genres.

Lastly, Musicares and the Grammy Museum will also be the beneficiaries of the annual Grammy Charities auction currently being hosted on eBay. The auction, which features numerous high-profile events, memorabilia and opportunities, is accepting bids on its various items until April 20. Some of the items currently up for auction include a Shawn Mendes concert ticket/meet-and-greet package, currently at $2,326.04 USD ($3,097 CAD) over 28 bids, a signed guitar from Pearl Jam's Mike McCready, currently at $1,700 USD ($2,258 CAD) over 11 bids, and a signed, framed copy of John Mellencamp's Uh-Huh album, currently at $210 USD ($279 CAD) over 12 bids. Some other items included Skrillex headphones, a signed Post Malone CD, framed and signed Lorde "Royals" sheet music, and a signed copy of Khalid's American Teen LP.