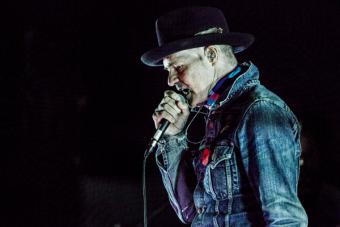 The late Gord Downie will receive the 2019 Allan Slaight Humanitarian Spirit Award at the Canadian Music & Broadcast Industry Awards Gala Dinner on May 9. The event is held at Toronto’s Rebel Entertainment Complex during Canadian Music Week.

The Tragically Hip frontman died in October 2017 at age 53 years from an aggressive and incurable form of brain cancer called glioblastoma, His death followed a long career as a musician, poet and activist.

“Gord Downie was an inspiration to all Canadians, and his life's work represented the embodiment of all that the Allan Slaight Humanitarian Spirit Award celebrates," Gary Slaight, CEO and President of Slaight Communications/Slaight Family Foundation, said in a statement.

He and The Tragically Hip donated to causes in their hometown of Kingston, Ontario, including Almost Home, which helps families get through hospital stays for children receiving hospital treatment; and Camp Trillium, a Hamilton, Ontario-based camp offering recreational fun for child cancer patients and their families.

Slaight also pointed to Downie's legacy that continues with The Gord Downie & Chanie Wenjack Fund, a partnership between the late performer's foundation and the Wenjack family.

The fund is named after Chanie "Charlie" Wenjack, an Ojibwe First Nations boy who in October 1966 ran away from the Cecilia Jeffrey Indian Residential School, which he attended in Kenora, Ontario for three years.  While on the run, Wenjack was killed while walking a set of railroad tracks, 400 miles away from his home.

"He didn’t know that. He didn’t know where it (home) was, nor know how to find it, but, like so many kids — more than anyone will be able to imagine — he tried. I never knew Chanie, the child his teachers misnamed Charlie, but I will always love him," Downie said in a statement in September 2016 as he released The Secret Path, an album, movie and book project inspired by the young boy's story.

"Chanie haunts me. His story is Canada’s story. This is about Canada. We are not the country we thought we were. History will be rewritten. We are all accountable, but this begins in the late 1800s and goes to 1996. ‘White’ Canada knew – on somebody’s purpose – nothing about this. We weren’t taught it; it was hardly ever mentioned," Downie wrote.

Launched in 2016, the DWF runs programs and events to encourage awareness, education and action towards reconciliation between Canada's indigenous peoples and its majority population.

These include the Legacy Schools program, which encourages awareness of the residential schools experience among Canadian students; the Legacy Spaces program, which creates spaces to distribute information about indigenous rights and reconciliation; and Secret Path Week, a set of community and national events that run from October 17 to 22.

Representatives from the Downie family will receive the award on behalf of the late music legend at Canadian Music Week dinner.

"Gord Downie created a legacy during his final years, dedicated to creating a positive change in Canada. This legacy demonstrates how just one story can inspire an entire generation,” Neill Dixon, president of Canadian Music Week, added in his own statement.