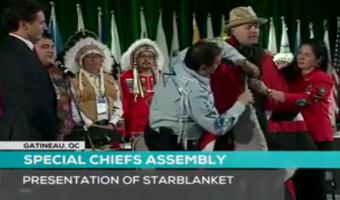 In an emotional and powerful ceremony, The Tragically Hip frontman Gord Downie was honoured by First Nations chiefs for what he's done to raise awareness about indigenous issues and start a new relationship with Indigeneous Peoples in recent months. The singer was emotionally overwhelmed during ceremony, crying and hugging and kissing various elders on stage.

The presentation took place at the Assembly of First Nations' Special Chiefs Assembly earlier today (Dec. 6) in Gatineau, Quebec. During the assembly, Downie was presented with an eagle feather, given a spiritual name that translates into "Man who walks among the stars" and had an honour song performed on his behalf. Downie was also wrapped in a "star blanket" created by the Dakota people.

"We're here to honour Gord for what he's done in such a short time period to elevate all of our issues," said National Chief Perry Bellegarde during the presentation. "When he made those statements at his concerts about getting things done and he raised a spotlight on our issues and we wanted to take the time at this special chiefs assembly in front of all of our relatives, in front of all of our chiefs here ... to honour this man."

In recent months, Downie has released Secret Path, a solo album/animated movie/graphic novel project following the story of Chanie Wenjack, a 12-year-old boy who died while running away from the Cecilia Jeffrey Indian Residential School near Kenora, Ontario in 1966. Money from that project is being dedicated to the The Gord Downie Secret Path Fund for Truth and Reconciliation, via The National Centre for Truth and Reconciliation (NCTR) at The University of Manitoba as well as the Gord Downie & Chanie Wenjack Fund.

Additionally, during The Tragically Hip's most recent cross-country tour Downie used the high-profile shows as a call to action for the Canadian government to do something to reconcile the many mistreatments First Nations peoples have suffered because of government policies over the years.

"He took the time to acknowledge this hurt, this wrong, and he challenged government to make it right," Bellegarde continued.

Prime Minister Justin Trudeau was on hand to witness the ceremony.

Downie used the opportunity to say Canadians needed to start over in their relations with First Nations.

"Soon, in a few days, a couple of weeks, there's 150 years that Canada wants to celebrate, and I will personally then celebrate the birth of our country, celebrate the next 150 years. It will take 150 years or seven generations to heal the wound of the residential school," Downie said.

"To become a country, that can truly call ourselves Canada, it means we must become one, we must walk down a path of reconciliation for now on. Together, and forever. This is the first day of forever, the greatest day of my life, the greatest day of all of our lives. Thank you."

What's most remarkable about Downie's efforts towards reconciliation is they come as the singer has been battling terminal gioblastoma brain cancer which was diagnosed last December. Since then he's had two separate brain surgeries to fight the disease and has raised more than $1 million for cancer research via the Gord Downie Fund for Brain Cancer Research.