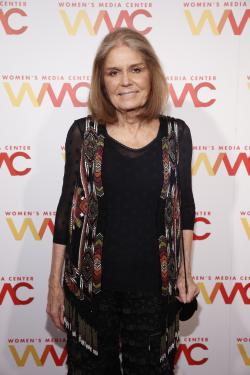 Feminist campaigner and writer/journalist Gloria Steinem will receive 85 tributes today (March 25) from across the world of social activism to mark her 85th birthday, including from Michael Moore, Cyndi Lauper, Jane Fonda and other life-long friends and fellow campaigners.

They were compiled and unveiled by the Women's Media Center, a non-profit Steinem co-founded in 2005 with Fonda and Robin Morgan to raise the profile and rights of women and girls.

Prominent among the tributes were shout outs from those who Steinem inspired to join the ranks of feminism and social activism.

Cyndi Lauper recalled, at age 15 years, first seeing Steinem on the local news, confidently speaking about women's issues that touched on the pop singer's own home life and neighbourhood.

"She spoke calmly and clearly about fairness and equality in women’s rights. Her words resonated and inspired me. And she was funny, too. Fifteen years later, involved in the women’s movement myself, I was given a song to sing called “Girls Just Want to Have Fun.” I saw the possibility that it could be an anthem to empower all women of all ages. But without Gloria’s advocacy, I’m not sure I would have been inspired the same way," Lauper said in a statement.

Documentary maker Michael Moore likewise recalled watching Steinem on TV-- this time when she appeared on the Phil Donahue Show -- which fired up his own lifelong passion for social political activism.

"The things you said I had never heard before. I asked my mother about what you said.  She said, 'women can do anything men can do, and often do it better.' I wish you could’ve seen the look on my face! Boom! Sometimes change occurs in a nanosecond! Thank you for all you’ve done to make this world a better place. I remain with you in this fight," Moore said in his own statement.

Steinem, as a writer, first gained national attention after she went undercover to pen an article exposing the 1960s world of Playboy Bunny clubs. That was followed by Steinem touring the U.S. to speak at women's liberation movement events and rallies and to lead marches.

In 1968, she helped launch the New York magazine as an editor, before in 1972 co-founding Ms. Magazine. And her books like Revolution from Within: A Book of Self-Esteem and Outrageous Acts and Everyday Rebellions became bestsellers.

But as an early spokeswoman for the American feminist movement, and for co-founding the Women's Media Center in 2005, is where Steinem's birthday tributes often singled her out as a catalyst for social change.

The View co-host Joy Behar praised Steinem for being unapologetically authentic. "She has inspired countless women, including me, to challenge the status quo and fight for political, social, and economic power to women. She’s the woman we want our daughters to grow up to be. Hell, she’s the woman I want to grow up to be. To my friend Gloria, Happy Birthday!” Behar said in her own statement.

Elsewhere, actor and writer Lena Dunham also praised Steinem for being human and accessible. "I love that in your private life you walk the walk, advocating for women globally and also close to home. I love that you write like you talk and talk like you write," she said.

And Hollywood actor and activist Jane Fonda in her own tribute stressed she feels secure in Steinem's presence: "She makes me feel safe. That's because she is deeply kind. Her slender body seems to curve towards you like a parenthesis, leaning in, protecting. That she is barraged by demands on her time, she is always willing to stop and listen, wanting to help, to understand.

As a galvanizer for change, Steinem led calls equal pay, equal civil rights and the right to an abortion during the 1960s and 1970s.

That includes activism by Steinem to secure worker rights for underrepresented women. "One of the first memories I have with Gloria is when domestic workers held a 24-hour vigil in front of the governor's office to demand movement on the passage of the New York State Domestic Workers Bill of Rights. I sent her a quick note letting her know we were there. She showed up, brought friends, and stood with domestic workers for hours, sharing stories about past campaigns that she had been a part of to recognize women's work in the home, to help keep our energy up," Al-Jen Poo, executive director of the National Domestic Workers Alliance, said in a tribute.

Steinem will be the subject of an upcoming movie based on her memoir, The Glorias: A Life on the Road, to be directed by Julie Taymor and starring Julianne Moore, Alicia Vikander and Christine Lahti as Steinem during various milestones in her life as she championed women's rights.

"Playing her in [the play] Gloria: A Life, I came to understand that maybe because she grew up thinking her mother did not matter; that indeed her own needs didn't really matter, she became determined to make sure all women on the planet mattered," Lahti said in a statement.

Well before the current #MeToo and Time's Up campaigns, Steinem and her fellow co-founders of the Women's Media Center launched the nonprofit to raise the profile and political power of women and girls in media by getting their stories told and their voices heard.

"Our WMC training and leadership programs sharpen the media savvy and interview skills of women and girls," the Center says on its website, as an echo of the early media skills and poise that Steinem exhibited as an early feminist pioneer.

The Center also issues periodic reports on women being underrepresented, or mispresented, in the media.

And the Center's WMC SheSource serves as an online brain trust of around 1,100 female experts that journalists, talent bookers and other content producers can turn to for comment and opinions.